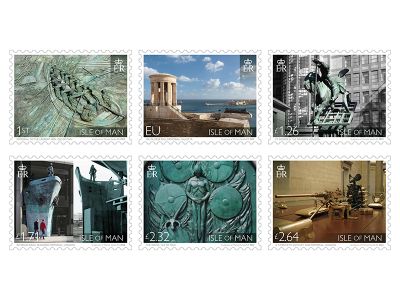 Isle of Man Post Office is pleased to present a set of six landmark stamps focussing on the major public works by the world-renowned sculptor and printmaker Michael Sandle RA.

Michael was brought up and studied on the Isle of Man before embarking on an illustrious career in art and education which now spans more than sixty years.

He was born in Weymouth in 1936 but his family re-located to the Isle of Man during his childhood and he studied at the Douglas, Isle of Man School of Art 1951-54. He then studied at the Slade School of Fine Art 1956-59 and worked as a lithographer in Paris in 1960. He lived in Germany 1973-99, becoming Professor of Sculpture at Pforzheim in 1977 and then at Karlsruhe from 1980.

Elected a Royal Academician in 1990, he resigned because of the way the RA handled the Myra Hindley painting controversy during the 1997 Sensation exhibition and was re-elected in 2005 and was awarded the first Kenneth Armitage Fellowship 2005-07.

This year is the 30th anniversary of the unveiling of the Malta Siege-Bell Memorial 1988-92 in Valletta by Queen Elizabeth II which Michael describes as his greatest achievement and for which he was awarded the Henry Herring Memorial by the US National Sculpture Association. His other most notable work is the impressive 7 metre high bronze International Seafarers’ Memorial 2000-01 in London. His work is represented in numerous public collections in the UK, Isle of Man and overseas, including the British Museum, the Imperial War Museum, the V&A and Tate in London, the Metropolitan Museum of Art in New York, and in museums in Germany, Poland, Japan and Australia.

Michael Sandle RA, said: “I am proud of the fact that I am considered to be a Manx artist too and also feel extraordinarily fortunate to have been surrounded by the shapes, colours and ever-changing light that is special to this Island when I was an emerging young artist, all of which went into my work. Now that I am a very much older and established artist I am extremely proud that the Isle of Man Post Office are issuing six stamps with examples of my work on them. I feel that this means that I am now thought of as a local boy what done good!”

Maxine Cannon, General Manager Isle of Man Stamps & Coins, said: “It is an honour to share te works of renowned artist Michael Sandle RA through this collection of six stamps. The set showcases the achievements of a Royal Academician whose powerful and provoking works are internationally respected and enjoyed. That two of his major public sculptures are here on the Isle of Man is testament to his commitment to the cultural life of the Isle of Man and what his upbringing and early education on the Island meant to him.”