The Titanic – Ship of Dreams 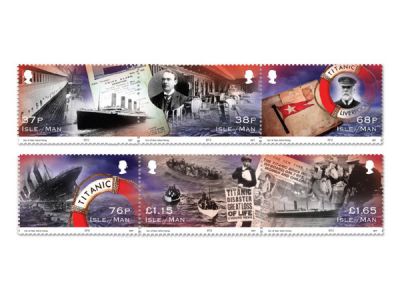 The Isle of Man Post Office presents a set of six stamps to commemorate the 100th Anniversary of the loss of RMS Titanic after striking an iceberg.

Our landmark stamp issue includes a wonderful collectors folder which traces the voyage from launch to loss and forms a fitting postal tribute to this most infamous of tragedies.

It is one of the deadliest maritime disasters in peacetime history, more than 1,500 passengers and crew died in the early hours of 15th April 1912.

Captained by Edward John Smith, one of the company's most respected and experienced officers, and billed as the largest and most luxurious ship in the world, the Titanic was on her maiden voyage from Southampton to New York, when tragedy struck. At 12.05am, the order was given to uncover the lifeboats. But the operation was disorganised. Eighteen lifeboats were launched – the first at 12.45am; the last at 2.05am. Ten minutes after the last lifeboat was launched, the bridge was under water and the forward funnel collapsed.

Within five minutes the Titanic gave a sudden lurch and threw the two remaining lifeboats into the sea. There was a rumbling like thunder from the bowels of the ship and at 2.20am the lights went out and the Titanic sank, plunging more than 1,500 people, including Captain Smith, into the icy sea.

But it was the heroism of the band that will always be remembered. As the stern began to rise, violinist Wallace W Hartley, who was band leader, told the other seven musicians they could stand down. But they remained. They all sacrificed their lives with their courage.

Please visit our website here to find out more about our stamps and products.