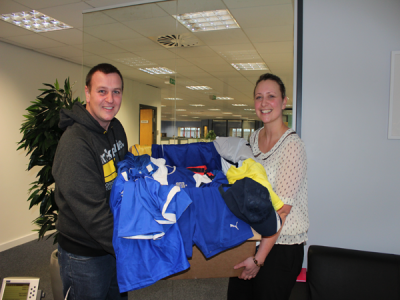 Two football teams in a remote town in South Africa have been sent new kit supplies thanks to the help of Isle of Man Post Office.

Local man Steve Allen has been supporting the people of Port St Johns, a town situated on the wild coast area of the Eastern Cape in South Africa, for the past nine years. He came across it while on a backpacking journey through Africa where a two-day trip became an eight-month stay and he has visited them every year ever since. He began teaching the local children football and buying them some balls which then led to him taking second-hand Everton Football Club tops over with him on every other visit.

"As the locals became more and more enthusiastic about football, this progressed into me forming my own 'Everton Zone' and then with the help of the Isle of Man Everton Supporter's Club, I began sponsoring a local football team, which in turn, changed its name from 'Skom Boyz' (meaning boys from the village) to 'Everton Skom Boyz."

Steve recently collected a batch of 70 pre-owned Everton football tops and other merchandise on the Island through the help of the Isle of Man Everton Supporter's Club. However, the finance of sending the large parcel to Port St Johns was proving difficult and Steve sought assistance from the Isle of Man Post Office Sponsorship Committee.

"We were delighted to support Steve in his gallant efforts to help the people of Port St Johns flourish their sporting abilities with a parcel of mainly tops, some shorts, caps and boots. The Sponsorship Committee aims to support a variety of local initiatives throughout the year and is always keen to hear from individuals and organisations looking for support which we may be able to help with."

"I largely fund everything from my own pocket and the support from the Isle of Man Post Office to supplement the cost of sending over 70 Everton tops has helped me enormously. More importantly it has brought hope and joy to a small community that appreciates it more than I could ever express. It's a great gesture for a worthy cause and will help make a huge difference to an area that receives little help."