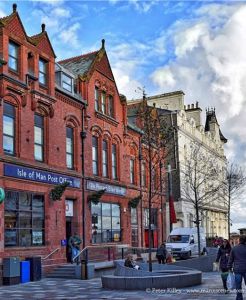 The home of the former flagship post office in Regent Street, Douglas has been sold. The property, which is situated in one of the main gateways to Strand Street, went on the market in June last year and has now been sold for £1.05m to Thompson Holdings Limited.

Since the former crown post office was converted to a sub agency and relocated to Strand Street in August 2016, the building has been left vacant with Isle of Man Post Office having no future use for it. Now it's destined for a different future.

Buyer James Thompson, owner of Thompson Holdings Limited, moved to the Island four years ago from Northern Ireland, having spent a very successful time in the worldwide aerospace industry. James says the Isle of Man is now his home, having invested in properties and various businesses and is happy he has cemented his future here.

He said: "The Manx people are such fabulous people and that is why I also want to continue to invest in the community. There have been many possible opportunities that have caught my eye since I fell in love with the Island and we have been lucky enough to be successful with a few of these already. This iconic building built in 1886 captured my interest more than any other and you only have to look at it in its prime location along with its history to understand why."

Thompson Holdings Limited is currently in discussions with various parties about the renovation and exciting future for the property.

Simon Kneen, Chief Executive of Isle of Man Office, said: "The Regent Street building has been a part of Isle of Man Post Office's property portfolio for a very long time during which many customers will have visited it to transact their postal business but we no longer have the need for such a large building in the centre of Douglas. We wish Thompson Holdings Limited every success as its new owner and for the plans they have for it."

IOMPO wishes to advise customers that with effect from today (9th March), the post boxes at the Regent Street building will cease to be in operation and that the nearest alternative posting facilities available are located in the following locations:
• Douglas Post Office, Strand Street
• Granville Street
• Market Hill
• Sea Terminal building