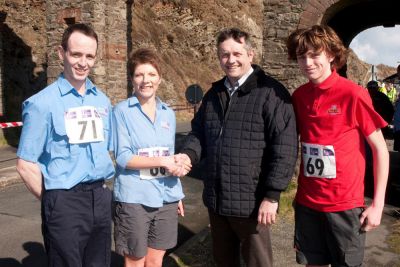 Isle of Man Post Office, a continued sponsor of the Isle of Man Postman's Walk is delighted to announce details of this year's winners. The six mile race took place on Sunday morning (23rd March) from 10:15 and was staged along Marine Drive, Douglas. It is the sole surviving uniform race-walking event in the British Isles.

The race, a traditional event that attracts Post Office employees from across the Island and the UK was brought to a start by the new Post Office's new Chairman Mr Graham Gregeen MHK. The top three contenders did extremely well with quicker timings than those of 2012. In first position at 48 minutes and 30 seconds saw winner Michelle Turner, national champion from Ramsey Sorting Office, she was followed by closest rival Luc Legon of East London District Office at 50 minutes and 23 seconds and finally in third place was 2012 champion Richard Creer of Douglas Part Time Postman at 55 minutes 27 seconds.

In addition to this, at a team level two races were held, this consisted of national teams which were made up of the Isle of Man, Birmingham and Edinburgh of which the Isle of Man won the race with nine points. The second team event was at a local level with two teams Ramsey and Douglas and Ramsey won this with 11 points.

Graham Young, Race Secretary said: "We were delighted that the Isle of Man Post Office's Sponsorship Committee once again sponsored this event. It has yet again proved to be a very popular and enjoyable race."

Sarah Read, Chairman of Isle of Man Post Office's Sponsorship Committee said: "We were thrilled to be sponsors of this year's event. Traditionally it has always been a popular occasion in the calendar and it's fantastic that we always receive such an encouraging number of entries from both postal competitors over here on the Island as well as those from across in the UK. We welcome entries from postal staff in the UK as well as those on the Island."