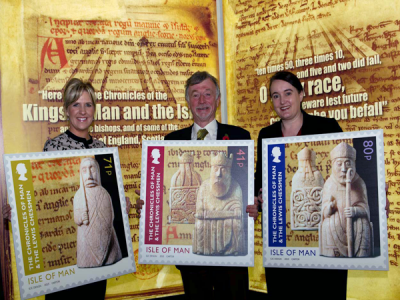 Ahead of 'The Forgotten Kingdom? exhibition opening to the public tomorrow (Saturday) at the Manx Museum, Isle of Man Post Office has revealed its collaborated stamp issue – the first one to be issued in 2013.

The Chronicles of Man and the Lewis Chessmen will feature on a set of six stamps from January 11 to coincide with Manx National Heritage's exhibition which runs until March 9 next year. The stamps were revealed this morning at a photo launch at the Manx Museum.The Chronicles are the earliest written accounts of the Island and document many of the most significant events of the medieval age. The Manx nation is fortunate enough to be able to witness the temporary return of these legendary, medieval manuscripts and the loan of a selection of the wonderful Lewis Chessmen in an outstanding display at the Manx Museum. The Chronicles were written by monks at Rushen Abbey and have been in the collections of the British Library for over two hundred years.

"When we heard the Lewis Chessmen and more significantly the Chronicles of Man were coming to the Island, we relished the opportunity to feature them in our stamp programme for 2013 and the results are stunning. The stamps will be officially launched on 13th January next year. The Chronicles teach us about early life in the Isle of Man, a time when the Island was the seat of power in a dominant sea kingdom that reached from the Irish Sea to the North Atlantic Ocean."

The earliest and most important manuscript from the Isle of Man is The Chronicles of Kings of Man and the Isles, which is on loan from the British Library. The Lewis Chessmen were discovered on the west coast of the Isle of Lewis and were made around 1200AD probably in the city of Trondheim in Norway. Most of them are carved from pieces of Walrus tusk, though three are made from the tooth of a sperm whale. Six pieces from the iconic collection of the Lewis Chessmen on loan from the British Museum will illustrate the stories told in the exhibition and of course feature on the forthcoming new stamps.

The exhibition starts from tomorrow (Saturday) at the Manx Museum – admission is free and is open from 10am –5pm Monday to Saturday.

The stamps are available to pre order now. To view them please click here