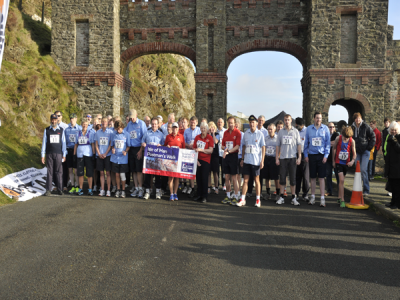 Postal staff from the Island and the UK will be taking part in the Isle of Man Postman's Walk being staged along Marine Drive, Douglas on Sunday (October 21) starting at 10.15am.

Traditionally the Postman's Walk was a local annual event, last held a quarter of a century ago, however Postman's Uniform Walks are held each year in the UK. It is hoped the Isle of Man hosted walk will be a successful and popular event and with 54 entries received, is bound to make for an interesting and hotly contested race.

The event is sponsored by Isle of Man Post Office and was the idea of retired postman Graham Young. He said:

"By winning the inaugural race in the current series of Parish Walks in 1960, Douglas postman Stanley Cleator started what was to become a long tradition of local postal staff extending their pedestrianism beyond their working hours and into their recreational life. Since then, many staff have fulfilled their ambition to complete a lap of the "Land of our birth" in less than one day. However, this particular race demands the ability to race-walk considerably more intensely, (like putting twenty hours effort into one) and endure clothing designed more for four miles per hour, than eight!

The tradition of walking in uniform goes back over half a century and in the UK it was first held in London. For a period in the mid sixties and early seventies, there was even a European Uniform Championship.

"Much like the Parish Walk, I am happy to see this event has attracted walkers of all abilities and experience. Pundits may have a clear idea of the individuals expected to be at the head of the field, but the National Team event looks likely to be a very keen contest between Mount Pleasant, London, Head Office Edinburgh and the Isle of Man, with the experienced Birmingham Head Office contingent sure to perform solidly. Is your Postie having a bash? Why not come and enjoy this novel spectacle on the spectator friendly course, with stunning backdrop. Although vehicular access is prohibited for the duration of the race, the footpath will be open and the 54 competitors can each be viewed on the road twelve times."

The race route starts and finishes at the Toll Gates on Marine Drive, Douglas and will be a ½ mile out and ½ back loop, total distance (for both men and women) six miles. A road closure order, granted by the Department of Infrastructure, will be in place on the day and the race will be held under the Race Walking Association Rules. Entry was open to all current and previous employees of postal administrations, irrespective of grade and a rule of the race is that appropriate postperson's uniform must be worn through-out the competition.

Geoff Corkish MBE MHK, Chairman of Isle of Man Post Office, who will be officially starting the race, said:

"I am especially pleased that we are holding this event which has not been seen on the Island for a long time. Traditionally it was always very popular and it's terrific that we have received such an encouraging number of entries both from employees in the Post Office as well as postal staff from various Royal Mail centres including Birmingham, Edinburgh, London Mount Pleasant and York. We welcome as many spectators as possible to come along and see our staff battling it out for individual and team awards at UK national and local level."

The race starts at 10.15am from the Toll Gates on Marine Drive, Douglas on Sunday 21st October.