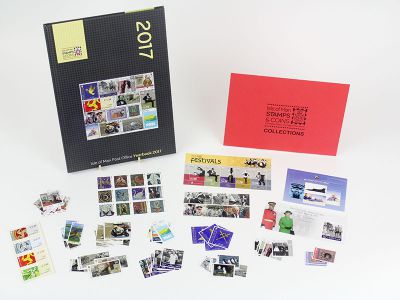 Isle of Man Post Office (IOMPO) has released its annual limited edition 2017 Yearbook, which has mint condition examples of every IOMPO stamp and miniature sheets issued this year.

The 80-page hardback book is also packed with additional imagery and fascinating text that includes contributions from key individuals involved in the design and creation of every issue. To provide further context to the stamp issued in 2017, there are also photos of related events attended by Isle of Man Post Office representatives during the year.

Limited to just 600 copies, this beautiful collectable contains a diverse range of themes from royalty, motorsport, wildlife to Manx history and culture. It contains 16 illuminating chapters which range from the commemorative to the celebratory, and captures milestone events in 2017 that are key to the Isle of Man.

Among the coveted collection includes:
• IOMPO's releases for Green Mann Food Matters in the Isle of Man, which saw former Blue Peter gardener come to the Island to promote these stamps that celebrate the booming local food industry.
• Isle of Man's first ever variable value definitive stamps that are now available as a philatelic item, as well as through the IOMPO's kiosk and counter network.
• A set and a miniature sheet that celebrates the 65-year anniversary of Her Majesty's ascension to the throne.
• A set of se-tenant stamps, as a tribute to HRH Prince Philip lifelong service to the British people, following his announcement that he would be stepping down from public engagements.
• A set of six stamps charting the relationship of the royal couple, as they celebrated 70 years of marriage.
• An exquisite set of six stamps celebrating the tercentenary year of the English Freemasons. By working closely with the United Grand of England, IOMPO had created an extraordinary set of stamps that has hidden images that can only be revealed under UV light.
• A set of miniature sheets that celebrate BLOODHOUND - a high-technology project to design and build a car that will break the 1,000mph barrier and set a new world land speed record - and its links to the Isle of Man. This set of stamps that fittingly inspire innovation, was developed using a special thermochromic ink, which when heated will reveal a technical drawing of this supersonic car.

Isle of Man Stamps & Coins General Manager, Maxine Cannon said, "2017 has been a remarkable year for Isle of Man Stamps & Coins. We have been so fortunate to have been able to celebrate and commemorate some really unforgettable and extraordinary events and achievements, which mean a great deal to those living on the Isle of Man. This highly collectable limited edition 2017 Yearbook is a brilliant way to preserve and cherish those significant moments in history."

IOMPO offers a 'no quibble' return policy, free worldwide delivery and aims to despatch an order within 24 hours by First Class post (Monday to Friday). For more information about the 2017 Yearbook or IOMPO's delivery policies, customers can visit IOMPO's website www.iompost.com