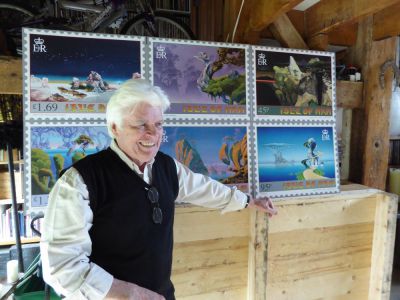 Isle of Man Post Office is pleased to present a set of stamps showcasing the artwork of internationally renowned artist and designer Roger Dean. The issue which includes an Isle of Man inspired image marks a significant collaboration between Isle of Man Post Office, Manx National Heritage and Roger Dean himself with a landmark exhibition at the Manx Museum in Douglas which has been specially commissioned for the stamps. The stamps and exhibition are both due for launch on August 19th.

Born in England in 1944, Roger Dean is well known for his album cover designs, posters and books. He attended Canterbury College of Art and later the Royal College of Art, where he received a first class Master's Degree and won the silver medal for work of special distinction.

More than sixty million copies of Roger's images have been sold worldwide and his work has been exhibited in galleries and museums including the Royal Academy of Arts, New York Culture Center and V&A where some of his most notable pieces are housed in the museum's permanent collection including two 'Yes' logo paintings plus other sketches. To add to this, Roger has inspired generations of young men and women who have become professional designers and artists.

Roger has had a long association with the Isle of Man and long-term resident Rick Wakeman who is best known for being in the progressive rock band 'Yes' and for which Roger has designed album artwork. Commenting on Roger's work Rick Wakeman said: "For me personally, Roger's art has a way of leading me gently into the canvas to embark on a journey of never-ending discovery. There always seems to be something new to discover, and that is where his association with music really stands out. Music also needs to offer something new with every visit. Put the two mediums together, and you have something really special. And that is the one word that sums up Roger Dean and his work: special. In fact, in retrospect, there should be the adverb 'very' before that adjective!"

The first stamp inspired by the Isle of Man features the painting titled 'Meeting Place' which has been produced exclusively for the stamp issue.

The third stamp from the collection is called 'Pathways' and uses the cover artwork for the 'Yes' triple album 'Yessongs'.

'Green Parrot Island' is the title of the forth stamp image which is derived from The Studio Albums 1969-1987 box set from 'Yes'.

The penultimate stamp features an image named 'Tales from Topographic Oceans' from the 'Yes' album cover.

Commenting on the stamps Roger Dean said: "Of all the ways and in all forms that I have shown my work, from album covers, books, posters, cards and calendars, this project has easily been one of the most exciting for me. Inevitably, childhood stamp collecting played a part. Even then, when almost overwhelmed by the amazing insights into history that they provide, and surrounded by the places depicted, it was always aesthetic satisfaction that was the driving motivation. My paintings are landscapes that are mostly inaccessible; stamps are the means of paying for the passage of messages from place to place, I love the purposefulness of that."

Maxine Cannon, Isle of Man Stamps & Coins General Manager said: "Isle of Man Post Office feels very fortunate to have had the opportunity to work with an artist of such experience as Roger. The images look amazing on the miniature artworks and we are delighted with the Isle of Man inspired image which Roger created exclusively for the stamp collection and which will be exhibited in Douglas. It's been a pleasure working with Roger on the stamp designs and we wish him much luck with the exhibition."

The stamp collection is available to order from August 19 at www.iompost.com/rogerdean and the exhibition will open from 20th August to 19th November at the Manx Museum in Douglas.