Isle of Man Stamps & Coins commemorates the Battle of Clontarf, a turning point in Irish history 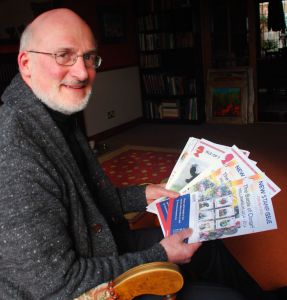 Isle of Man Stamps and Coins is pleased to present a set of six stamps to mark the millennium anniversary of the Battle of Clontarf. Due for release on April 15th, this commemorative sheet brings the historic events to life through the dynamic paintings of Victor Ambrus and evocative text from Dr Howie Firth, one thousand years after the great battle.

The Battle of Clontarf was fought outside Dublin on Good Friday, 23rd April 1041 and marked a turning point in the history of Ireland, stemming the power of the Norse and Danes.

In the text that accompanies the sheet, Howie provides a short but detailed narrative account of the dramatic events leading up to the demise of King Brian Boru and the conquest of his armies and territories in Munster.

Howie's narrative also includes select quotes and insights from expert chroniclers of the period and their accounts refer to King Brian Boru as a hero figure that brought years of peace, stability, commerce and learning to 11th century Ireland.

The stamps use six different renderings that are representative of war. The images created using watercolour and ink capture the stark brutality and ferocity of war and colour is applied in a bold and brash manner. Images are action led and show different scenes, various scenes from the battle as well as individual profiles including Brodir the Warrior and the portrait of the Earl Sigurd's mother Eithne.

Commenting on the stamps Dr Howie Firth said: "It's tremendous that the Isle of Man Post Office is marking the 1000th anniversary of an event that has resonated through the centuries in stories and sagas. The battle affected the lives of so many people and communities, from Ireland and Man to Orkney and Iceland. The sea route from Norway down through the Irish Sea and on the Mediterranean was one of the great trading highways of Europe at the time, and the Isle of Man was part of the complex mix of commerce and politics.

The stamps are beautiful, capturing the swirl of the battle when the two armies clashed on the land between the Liffey and the Tolka on Good Friday 1014. It's good to think of the shared appreciation in art and story bringing people together to remember those who lived and died at Clontarf."

Maxine Cannon, General Manager, Isle of Man Stamps and Coins said: "Victor Ambrus has produced some amazing images that capture crucial events in the thousand year old shared history of the Isle of Man, Ireland and the Orkney Isles. The Battle of Clontarf is a key event in history that has shaped the future of Ireland and of course the Isle of Man. These stamps pay a great tribute to the memory of the battle and King Brian Boru. We are very pleased to be able to offer our collectors such an important piece of history."