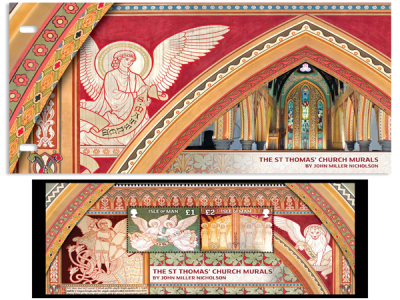 The work of renowned Manx artist John Miller Nicholson is showcased in a new stamp issue by Isle of Man Post Office in the centenary year of his death.

St Thomas' Church in Douglas is one of the town's most hidden treasures. Behind the exterior of the church located on a busy main road lies an awe-inspiring interior decoration of murals hand-painted by a house painting business based in Douglas run by John Nicholson and his brother James in 1896. So much of what was portrayed was symbolic, such as the vertical decoration on both gables representing the Tree of Life. In the chancel there are angels, musical and flying. The Archangel Michael is shown fighting a many-headed dragon, representing the devil, whilst Archangel Gabriel brings news to Mary that she is to be the Mother of God.

Meanwhile either side of the arches in the nave religious symbols abound with the Ark of the Covenant, Golden Candle Stick and the Table of Shewbread. The four evangelists appear as a man, lion, ox and eagle. Next comes the lamb, pelican and dove – being well known representations of the very foundations of truths of the Christian faith.

St Thomas' Church was designed by Ewan Christian, an architect of Manx descent, who chose the architecture of the 12th century for its style. It opened on 1st August 1849 and in 1882 Canon Savage was appointed to St Thomas'. A keen antiquarian with knowledge of church architecture, he put forward the idea that the church would be enhanced if the walls were decorated in a form appropriate to its style of architecture and so transpired the relationship with self-taught artist John Nicholson.

Often signing his work 'J.M.N', John Miller Nicholson was born in Douglas on the 29th January 1840, the son of William Nicholson, house painter and decorator. He was an excellent draughtsman who developed his skills as an apprentice with his father's firm and through meticulous study of life in the colourful, bustling streets of Victorian Douglas.

Today the murals have undergone some restoration to protect their beauty and are a must-see for anyone who is a fan of Nicholson or indeed is intrigued to see what artistic heritage is in store behind those church doors.

"The stamps are wonderful and they reflect the historical nature of St Thomas' Church. The murals are almost like hidden gems as many people don't even know they exist. To have this magnificent artwork showcased in postage stamps is a real delight for our church – the murals are magical and there's no other church like it for its architecture and internal decoration on the Island."