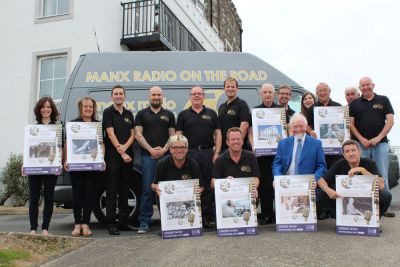 The 50th anniversary of Manx Radio is being celebrated in what is the ultimate accolade by Isle of Man Post Office with the issue of a set of eight stamps to mark the "historic landmark" of the Island's national radio station.

The stamps, which go on sale from October 1, have been specially designed and pictorially reflect some of the key programmes and services that the "nation's station" broadcasts throughout the year.

A rough sea image by Simon Park reflects the daily weather reports, while one of the House of Keys by Andy Stephenson highlights current affairs programme Mandate.  Outside broadcast coverage shows the visit by the Queen in 1979 with an iconic image by Bill Peters, courtesy of Manx National Heritage.

There is Mannin Line with the programme's  avuncular host David Callister in the studio, Countryside with the station's respected farming correspondent  John Kennaugh and musician and 'big band' enthusiast Jim Caine, presenter of the ever popular "Sweet 'n' Swing" programme.

Popular broadcasters of yesterday are also remembered and will certainly evoke nostalgia among many older listeners. Alan Jackson is shown presenting his popular morning show Jackson's Jollybodys with a group of children while TT coverage is depicted by the late Peter Kneale, commentating from the Grandstand studio, who was known as the 'voice of the TT' to fans around the world.

Maxine Cannon, general manager of Isle of Man Stamps and Coins said: "We are delighted to present our latest stamp issue which celebrates the tremendous 50 year landmark anniversary of Manx Radio, the first commercial radio station to be licensed in the British Isles and the longest standing."

She added:  "Since the station's inception in 1964 it continues to provide its listeners with the latest relevant local community news and information through its varied shows and this is something that we have replicated through the images used on our stamps in this issue."

Manx Radio's business director John Marsom said: "We are extremely proud to have been selected by the Isle of Man Post Office to have a series of celebratory stamps created to mark our 50th year in broadcasting.

"Isle of Man Post Office has done the station and the Island proud and we cannot thank them enough for their enthusiasm which has led to the production of this issue. We look forward to promoting the issue on the radio and around the world at manxradio.com."

A special presentation pack giving an account of the station's 50 year history has been compiled by the Post Office in conjunction with Manx Radio.  In it journalist and broadcaster Terry Cringle details the station's history and there are also photographs of many Manx Radio broadcasters, past and present.  This, along with first day covers and mint sets of the stamps, can be pre-ordered online at iomstamps.com or by calling the Stamps and Coins team on 01624 698430.  From October 1 they will also be available at the Post Office in Regent Street, Douglas.