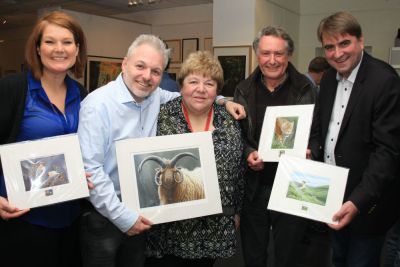 On Wednesday (May 6) evening the Stamps and Coins division of the Isle of Man Post Office opened the doors of its wonderfully curated 'Small Wonders Exhibition' being held at the Sayle Gallery until May 26.

The exhibition which celebrates 175 years of postal history here on the Island is linked with the Post Offices recently issued 175th Anniversary Penny Black stamp and the original Penny Black which was officially released for use on May 6 1840, 175 years ago. The original Penny Black is important to the Post Office in a number of ways but primarily its launch marked the birth of the modern British postal system which is now used around the world today.

The 'Small Wonders Exhibition', which has been carefully curated by the Sayle Gallery in collaboration with Manx National Heritage, includes a wide range of the postal history paraphernalia and original artworks from Manx Masters Tony Onley, Norman Sayle, John Nicholson, Colleen Corlett and commercial big hitters such as Paul Smith with the 2012 Olympic issue, bookended with a rare, original Penny Black stamp and new release marking the 175th Anniversary.

Stamps and Coins customers and other key individuals involved with the creation of stamp issues over the years were invited to the exhibition preview night to celebrate and mark 175 years of postal history and the opening of this exhibition.

The guests who comprised of an eclectic mix of individuals enjoyed a relaxed and informal evening while surrounded by this fascinating exhibition which is now open to the public.

Pictured above is an image of Maxine Cannon, General Manager of Isle of Man Stamps and Coins with distinguished guests and Artist Jeremy Paul at the Sayle Gallery. The individuals are shown holding Jeremy Paul prints as follows: Big Cats, Manx Bird Atlas and a Christmas stamp issue.