‘There But Not There’ Remembering the fallen Manxmen of WW1 with the launch of the ANZAC Memorials of Rayner Hoff. 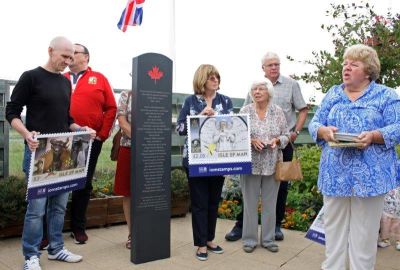 On Saturday 4th August 2018, a commemoration exactly 104 years after the outbreak of the Great War took place at the Manx Aviation and Military Museum in Ballasalla and was attended by family members whose relatives are featured on a new stamp collection from Isle of Man Post Office.

Starting proceedings was Isle of Man Stamps and Coins General Manager Maxine Cannon who described  the background of Manx born sculptor Rayner Hoff and the project to celebrate his work on a collection of stamps which involved a collaboration between Paul Ford, Deborah Beck and Louise Cornwall, who are both based in Sydney, Australia.

A simple service of Remembrance took place and Ivor Ramsden of the Manx Aviation and Military Museum shared his research into the fate of each soldier, followed by WW2 veteran Hector Duff recounting his visit to the ANZAC cemeteries. Garry Hilton of the Isle of Man Post Office Southern Delivery Office recited from a book of Manx poetry titled "Longing for Home".

On display around the museum garden sat a number of silhouettes of WW1 soldiers, each bearing the name of a Manx soldier who served in the First World War. The figures, made from perspex and being transparent, have an ethereal, almost ghostly appearance which remind us that although these men are long dead, their memories are kept alive by us today.

The service concluded at 11am with the Exhortation and Last Post played by young musician Ashley Cole of Rushen Silver Band, finishing with the Manx national anthem.