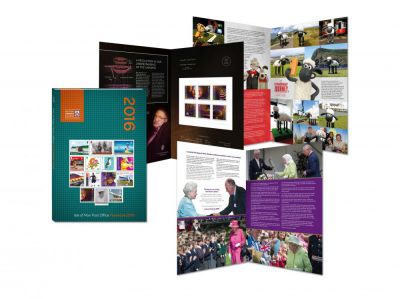 Isle of Man Post Office is pleased to present its 2016 Yearbook, the ideal gift for stamp collectors or those interested in the Isle of Man. It is packed with a mint condition set of every stamp issue and miniature sheet from 2016, together with informative text and stunning high definition images to accompany each collection.

This hard-backed book contains a diverse range of themes from sport, aviation, Manx life and art to historical milestones. It contains 16 fascinating chapters that range from the commemorative to celebratory and include Isle of Man Post Office's releases for Team GB Rio 2016 Olympics which saw Chris Hoy come to the Island and promote them, Matt Sewell's Birds stamp issue which Matt put the final touches to when he visited the Island earlier this year, Islands & Bridges by Roger Dean, The Battle of the Somme and the Battle of Jutland.

During 2016, Isle of Man Post Office was tremendously honoured to celebrate the 90th birthday of Her Majesty Queen Elizabeth II with a set of eight stamps, and to work with The Sun newspaper's renowned Royal photographer, Arthur Edwards MBE, to produce these. Each image was personally selected by Arthur from his 40 year career photographing the Queen and her family.

Isle of Man Post Office has also been especially proud of its Royal Aeronautical Society 150th Anniversary: Innovation in Aerospace stamp collection which traces the development of cutting edge technology over the last 150 years. The Isle of Man has been central to a number of the achievements from the design and manufacturing of parts and precision components on the International Space Station (ISS), and as part of the celebrations seven sets of the stamps travelled into space with Major Tim Peake where they spent six months on ISS before returning to Earth.

2016 saw the issue of a stunning set of six stamps commemorating the 100th anniversary of the Theory of General Relativity. The issue celebrates the work of two of the greatest minds, Albert Einstein and Stephen Hawking and includes a contribution from Professor Hawking who personally approved the issue alongside The Stephen Hawking Foundation. To add to this, Isle of Man Post Office's General Manager, Maxine Cannon, attended the 2016 Starmus festival in Tenerife where the stamps were officially launched by Stephen Hawking himself!

Another notable collection this year has been a set of six stamps produced in association with the Royal Artillery, to celebrate 300 years of its remarkable achievements. The stamps which show a selection of uniforms worn by the gunners in the regiment's 300 year history include an image of modern day hero Kate Philp who lost her leg in a mortar attack in Afghanistan. Major Philp came to the Island in May to help launch the stamps and was involved in the Captain-General's Baton tour.

To add to this, Isle of Man Post Office was proud to collaborate with Aardman to produce a set of eight stamps to celebrate Aardman's 40th year. The stamps feature well known characters including Wallace & Grommit, Shaun the Sheep and Morph with two exclusive stamp images of Morph created on the Isle of Man to complete the set.

This highly collectable full colour hardback book is an essential to any collector or historian. The issue stories are told in greater detail than elsewhere with much wonderful exclusive content and expert commentary. There are stamp mounts integral to each chapter to accommodate the complete mint collection for the year which is included in this highly collectible limited edition volume. The price of the book reflects the total face value of the stamp content. Don't miss out - get your copy in time for Christmas, before stocks run out!