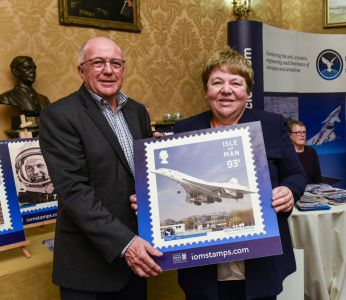 Isle of Man Post Office has produced a stunning limited edition cover to mark the 40th anniversary of the first ever commercial Concorde flight.

This special cover, which is limited to 500 copies, features high definition images of Concorde's first commercial flight taking off on 21st January 1976 and the very last touchdown on 23rd November 2003. As well as marking Concorde's historic flight, it also celebrates the Royal Aeronautical Society (RAeS) 150th anniversary by featuring the Concorde stamp from the Post Office's forthcoming release of a collection of eight stamps, showcasing cutting-edge technology over the last 150 years and is postmarked for 21st January 2016.

One of the most iconic aircraft of all time, the Anglo-French supersonic airliner Concorde, which was retired from service in October 2003, created a milestone in commercial aviation history 40 years ago with the start of the world's first scheduled supersonic passenger flights on January 21st 1976. Concorde revolutionised air travel with the journey time from London to New York being reduced to three and a half hours as opposed to about eight hours for a subsonic flight.

The cover is signed by Captain David Rowland FRAeS FRIN who joined BOAC (now known as British Airways) in 1969, as co-pilot/navigator on VC 10 aircraft. Soon after Concorde entered service, he joined the fleet as a co-pilot in 1976. He subsequently left the fleet to obtain a command on BAC 1-11 aircraft, before returning to Concorde as a Captain. He was appointed Flight Manager, then Commercial Manager and later General Manager of the Concorde Fleet, finally retiring from British Airways in 1999. He is a Fellow and Past President of the Royal Aeronautical Society, a Fellow of the Royal Institute of Navigation and a Liveryman of the Honourable Company of Air Pilots.

Captain David Rowland FRAeS FRIN said: "I am delighted to have the opportunity to be associated with and to sign the limited edition cover issued by the Isle of Man Post Office, especially as it will feature the Concorde stamp from their superb collection marking aerospace milestones in the 150 year history of the RAeS – for me, a perfect bringing together of an aircraft that has played such a special part in my professional life and a Society that I have supported for many years."

Maxine Cannon, General Manager of Isle of Man Stamps and Coins said: "We are pleased to mark the 40th anniversary of the start of the world's first commercial Concorde passenger service which took aerospace travel to new heights. Concorde is one of the greatest and most innovative icons in aviation history and we are delighted to use its image on our special covers and in our new RAeS stamp collection."