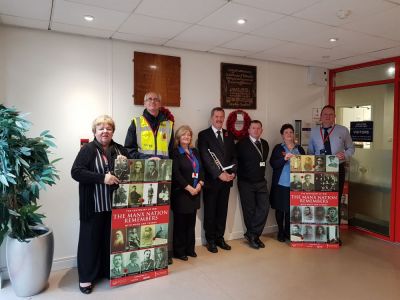 The service was led by our colleague Stephen Webster, a former Royal British Legion National Standard bearer and the wreaths were placed by Sue Gale and Tommy Crowe. World War 1 poems were read by Sue Corkill and Kevin Christian and the Last Post and Reveille was played by Brian Osborn of Castletown Silver Band.

The World War 1 memorial tablet was created by the great Archibald Knox and the inscription reads as follows:
In grateful memory of W. N. Hughes, P. H. Hunter, G. E. Kelly, W. S. Kennaugh, J. Kennedy, J. J. Shimmin. Members of the Staff of the I O.M. Post Office, who gave their lives, and a Testimony to others who fought in the Great War, 1914-1919."
Unselfish. Unafraid.

Both plaques were purchased by the staff of the GPO (General Post Office) in memory of the fallen. The present Post Office staff take great pride in both memorials and a moving remembrance service is held in front of them each year.