A Celebration of Coronation Commemoratives 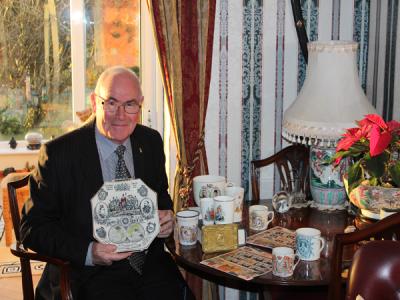 A new set of stamps to mark the sixtieth anniversary of Her Majesty The Queen's coronation will be issued next month.

For generations, commemorative souvenirs to mark the coronations of British monarchs ranging from medals, china or pottery drinking mugs, badges etc have been produced as treasured keep-sakes of these landmark occasions in British history. No doubt grand celebrations are sure to be repeated in 2013, the year that marks the sovereign's diamond anniversary of her crowning country and will also be celebrated with new commemorative items. Pictured above is Alex Downie OBE MLC who has been a collector of coronation items for over 40 years and whose memorabilia features in some of the artwork within the overall stamp issue.

Commemorative souvenirs date back from the coronation of Queen Victoria through to our present monarch. They were and remain, remembrances of times when procession, pageants, firework displays, street parties and sports celebrated the coronation of a new King or Queen. Some could be bought while others were 'awarded' to young people, to be kept as a reminder of events that were high points in their lives.

Probably the shortest-lived royal souvenir in the Isle of Man was a replica of the St Edward's coronation crown. It was made of 1200 lbs of confectionery rock and was eaten by schoolchildren on the day it had been made to celebrate Queen Victoria's Diamond Jubilee in 1897. Known as the 'Crown of Sugar', it was exhibited for a short time in the front window of its maker, Johnson and Co. Then on Jubilee Day it was smashed into easily sucked pieces. Tickets were issued to children and they exchanged these at the shop for five-ounce bags of pieces.

There have been many other notable souvenirs including coloured souvenir postcards in 1902 to mark the coronation of King Edward VII, medals and flags. By the time of the coronation of Queen Elizabeth II there were scores of commercial souvenirs. These ranged from men's tie pins to royal-crested handbags. Virtually anything was packed decoratively, even pencils and paint boxes for children and tinned biscuits and chocolates. Only time will tell what this year's coronation souvenirs will be!

Please click here to find out more about The Coronation of HM Queen 1953-2013 collection of stamps and products and to pre-order.

Pictured is Alex Downie MLC who has been a long collector of Coronation collectable items.