Aardman gets stamp of approval 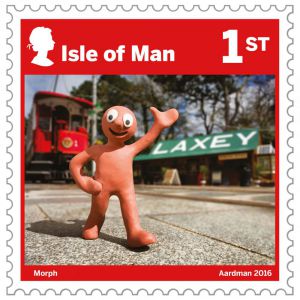 The Isle of Man Post Office celebrates the 40th anniversary of Aardman with a special set of postal collectibles - 27.07.16.

On August 12th the Isle of Man Post Office celebrates the 40th anniversary of the Academy Award®-winning studio Aardman with a special collection of stamps, featuring a variety of their most loved animated characters, whilst commemorating six iconic onscreen moments hand-picked by Aardman's creative team.

The collection stars childhood favourites: Wallace & Gromit, Shaun the Sheep, Morph, Timmy, and Trixie and Cuddlepuss of Creature Comforts fame. As a part of the celebration, two additional stamps have been created of Morph on a visit to the Isle of Man to complete the eight-piece set.

The first stamp features Morph almost being flattened by the Laxey tram, on his way to the Post Office.

The second stamp features Wallace & Gromit on their motorcycle and sidecar from their third film 'A Close Shave', where they found themselves unwittingly entangled in a sheep-rustling scheme with the evil dog, Preston.

The third stamp from the collection features Shaun the Sheep at his home in Mossy Bottom Farm, where there is rarely a peaceful moment as Shaun creates havoc for the Farmer and his sheepdog, Bitzer.

The fourth stamp is an illustration of Timmy, the little lamb of Shaun the Sheep's flock with a delicious cake celebrating Aardman's 40th birthday.

The fifth stamp features Shaun the Sheep from the classic episode 'Draw the Line', where Shaun and friends highjack a road line-painting machine to create chaos by painting a giant work of art in the field.

The sixth stamp is an illustration of Wallace & Gromit from the film 'A Grand Day Out', where the enterprising duo travel to the Moon to sample cheese.

The penultimate stamp features Trixie and Captain Cuddlepuss from the Academy Award® winning short film 'Creature Comforts', where they are relaxing at home on the sofa with a cup of tea.

The final stamp is a snap of Morph at Laxey Wheel, from his recent trip to the Isle of Man, where he discovered some 'fool's gold'.

The special edition has been endorsed and approved by Peter Lord and David Sproxton, Co-founders of Aardman, who said: "We're delighted, and honoured to be celebrating forty years of great characters, good humour and thoroughly British comedy with these lovely Isle of Man stamps."

Maxine Cannon, Isle of Man Stamps and Coins General Manager said: "All of us at the Isle of Man Post Office feel extremely proud to be working with Aardman on such a fantastic and nostalgic collection of stamps to celebrate '40 Years of Creativity' from the studio. It was a really special day when Morph came into our office, especially watching him lark about in the sorting office! We are committed as a business to encourage innovative thinking, and we hope that these stamps continue to inspire creativity amongst our community".

In addition to the eight-piece set, the Isle of Man Post Office has a range of Aardman gifts available, including limited edition prints signed by Co-Founder of Aardman Peter Lord.

The stamp collection is available to pre-order from today and can be purchased at http://www.iompost.com/aardman.