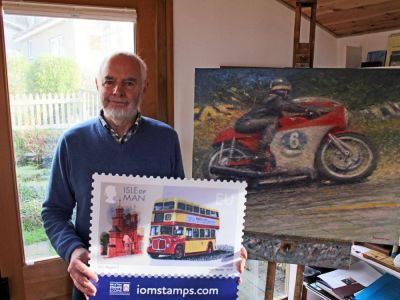 The stamps augment the 'All Aboard Please!' issues of 1999 and 2015. They feature Manx buses from both the Douglas Corporation and Road Services fleets, which subsequently merged to become Isle of Man National Transport on 1st October 1976.

Peter Hearsey is a renowned automotive history artist who studied at Kingston-Upon-Hull College of Art from 1960-1964. After working in London for many years within advertising, visualisation and illustration, Peter then moved to live on the Isle of Man in 1977. The artworks used in the issue showcase a selection of vintage buses from bygone days on the Island and are depicted next to historic Isle of Man landmarks and locations.

The Leyland Titan PD2, depicted on the 1st class value stamp, was the first double-decker with concealed radiators to enter the Road Services fleet in 1956. The EU value stamp shows the AEC Regent V that was part of the Douglas Corporation Transport fleet and first appeared in 1957. Douglas Corporation Transport was renowned for having unusual vehicles in their fleet: the AEC Reliance (£1.25 value), acquired new in 1958, was fitted with bodywork by Mulliner, better known as luxury car body builders. The bus illustrated on the RoW stamp, a Leyland Leopard, operated on the Island for 19 years and was the last bus in the fleet with a manual gearbox. The first Leyland National in the Road Services fleet appeared in 1974 and is featured on the £1.87 stamp. The final bus acquired by Douglas Corporation Transport was a Bedford YRQ (£2.02 value) which entered the fleet in 1975 and was therefore just a year old when the Douglas undertaking was amalgamated and nationalised.

The text that accompanies the presentation pack and first day cover has been prepared by well-known local author and transport historian Richard Davis. Richard was born in Douglas in 1946 and still lives on the Island. He has published seven books relating to the Island's history and buses: Buses of the Isle of Man 1945 – the Present Day, Douglas Corporation Transport Buses – Centenary Edition, Isle of Man Road Services Buses and four volumes of Those Were the Days. When not researching or writing books, Richard spends time restoring and displaying his vintage buses at transport events in the UK and Ireland.

Maxine Cannon, General Manager, Isle of Man Stamps and Coins said: "We are pleased to continue this acclaimed series of stamps which represents part of our Islands transport heritage. Working with local artist Peter Hearsey and author Richard Davis in the past has proven to be a success and a guarantee for quality. We are therefore delighted that both, Peter and Richard, have committed to continue working on the series and I'm sure it will be well received by the general public, stamp collectors and vintage transport enthusiasts alike."