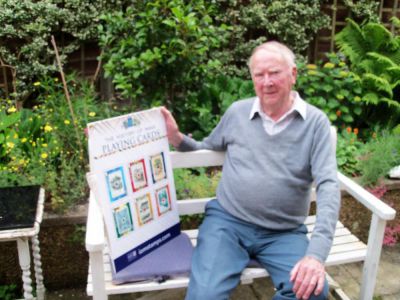 Isle of Man Stamps and Coins has another ace up its sleeve with its latest collectors stamp issue this time based upon the history of Manx themed playing cards. Due for release on the 8th of August, this issue features six fascinating, full colour stamps.

The history of playing cards is one of mystery and intrigue. Believed to have originated from China as far back as 1294 before arriving in Southern Europe by the late 1300s, and spreading quickly by trade and colonialism where they adapted to different cultures in which they found themselves. Indeed it is believed that the core elements of the decks and suits that we have today originated in the 15th Century from the red and black colour scheme of France during that period.

By the late 19th century the Isle of Man had developed into a popular tourist destination drawing visitors from across England. As the demand for the sale of novelty goods grew with holiday makers wishing to commemorate their trip, Warrington businessman, Samuel Webb, saw this opportunity and opened his first shop in Duke Street Douglas. He then commissioned a set of playing cards featuring iconic Manx elements as a souvenir for tourists and authorised London based designers and printers Charles Goodall and Sons to produce the first set. Over the next 57 years they with other companies, produced approximately 30 different designs leaving a unique legacy in playing cards history which has been beautifully commemorated into this collector's issue.

The six stamps incorporate select images from local expert Mike Goodall's exceptional collection. A descendant of Charles Goodall, Mike has worked closely with Isle of Man Stamps and Coins to provide access to and collate six of the most iconic in his extensive catalogue, and which also reflect the changing printing techniques of the era from engravings through to photography and ink. Each scene depicted, including Bradda Head and Peel Castle to the Laxey Wheel and the Groudle Wheel, is set against a vibrant background which corresponds to the rear of the original card, giving a complete representation with every unique stamp.

Mike Goodall collector said: "I was delighted when I was approached by the Isle of Man Post Office for help with their proposed issue of a set of stamps featuring Isle of Man souvenir playing cards with scenic views of the Island, These cards were published in the second half of the 19th century, some of the first of this type to be produced worldwide; several of the packs selected for use were designed and printed by my family's old company, Charles Goodall and Son of London. The designers are to be congratulated in having produced a gorgeous and elegant set of stamps with the Isle of Man views clearly recognisable in such a small space."

Maxine Cannon, General Manager of Isle of Man Stamps & Coins said: "We would like to thank Mike Goodall for his expert assistance and generous access to his exceptional collection which marks an important and unique addition to our collector's portfolio. This is a rare opportunity to own a collection which captures forgotten moments in Manx tourism history, from surviving architecture to lost landscapes."