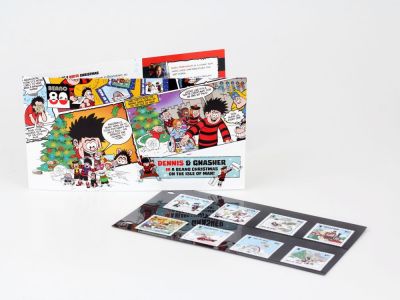 Over the festive period Dennis & Gnasher are stranded, without their mobile phones, on the Isle of Man to visit a mysterious uncle named Paul, who has a dark secret: he's a postman!!! After this nightmarish revelation (especially for Gnasher) it seems that Christmas is officially cancelled! But just when Dennis & Gnasher give up on the holidays Uncle Paul gives them hope by letting them into a secret: Writing a letter is like sending an epic text message that is then delivered by your own personal Postie Butler! Dennis & Gnasher are immediately hooked and with Uncle Paul's help, they even create their own stamps that they then use to send letters and cards to their friends in Beanotown. Not only do their friends write back, but they promise to meet together on what's quickly become the Christmas Isle of Mischief, to share the festive fun.

The artwork for the stamp collection and the accompanying comic strip have been drawn exclusively by Nigel Parkinson, who, since 2012, is the official Dennis & Gnasher artist and is one of the most prolific Beano artists since 1999.

Isle of Man Stamps and Coins General Manager, Maxine Cannon, said, "We are overjoyed that Dennis & Gnasher, along with all his pals in the Beano Studio of DC Thomson in Dundee, worked so hard to capture well known Manx locations and traditions in an exclusive Beano comic strip titled "A Write Christmas on the Isle of Man". We hope that we can encourage people of all ages to discover and engage with sending Christmas greetings. The moral of the tale is that by writing to friends and family by post is still the best way to catch up at Christmas or share good wishes at any time of the year."

Beano Studios' Director of Global Licensing, Angeles Blanco added: "We're delighted to work with the Isle of Man Post Office to create a unique festive collection of stamps. We look forward to seeing Dennis & Gnasher on Christmas cards, letters and parcels across the world."

• Dennis & Gnasher completing a 'snowcastle' version of the Tower of Refuge while a scary-looking Viking prepares to chuck a snowball. (ROW)

• Dennis & Gnasher, having painted their kartie/sled with Isle of Man Post Office livery, have Paul the Postman tied up in a sack as they throw presents to all while they race down Tynwald Hill. (£1.25)

• At a snowy Douglas Sea Terminal Gnasher is trying to grab at the non-existent tail of a Manx cat who is teasing him with a sausage-shaped Christmas gift. Behind Gnasher is the famous four-horned Loaghtan sheep, trying to 'spike' Gnasher! (EU)

• Dennis & Gnasher and the Manx Minx fairies make light work of the letters to Beanotown allowing time for Paul the postman to put his feet up! (ROW)

• At the old Marine Drive toll gate Santa, squashed into his tiny Peel P50 car, pursues Dennis & Gnasher in their menacing sidecar and, unseen by Gnasher, a Manx cat joins in the fun on his sled. (£1.25)

• Santa and his reindeers find flying conditions difficult as Dennis turns the world's largest waterwheel at Laxey into a snowball chucking machine! (EU)

• At Castle Rushen the Beano gang assemble for their surprise Christmas party proving that sending out invitations by post gets results. (1st)

In addition to the eight-piece set, first day cover and presentation pack, the Isle of Man Post Office has a range of Beano gifts available, including a limited edition print run of the original artwork and the exclusive comic strip, signed by artist Nigel Parkinson. All products are available to view and order at www.iompost.com/beano.