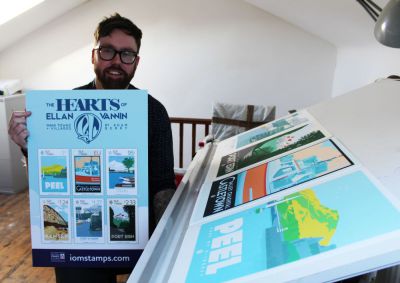 Isle of Man Post Office is pleased to present a set of vibrant stamps by Manx artist and designer Adam Berry featuring the iconic tourist poster of the early 20th century and the golden age of tourism on the Isle of Man. The stamp issue titled 'The Hearts of Ellan Vannin - Manx Towns and Villages' is due for issue on 19 January 2017.

Adam who works in commercial, public and personal art and design with some of the most high profile Island businesses and individuals was born, raised and still lives on the Isle of Man. From a young age Adam took an interest in art, following in his parents footsteps, both of whom attended the renowned Kensington Road Art School in Douglas.

The six stamps depict poster images of some of the Island's most beautiful towns and villages using Adam's crisp flat graphic style in vivid colours and flowing shapes.

The issue incorporates two Europa castle themed stamps for 2017, with the one being shown on the 1st Class stamp depicting Peel. Situated on the west coast, the old fishing port retains a sense of authenticity with its narrow streets, sandstone buildings and castle ruins.

The second of the Europa stamps is represented on the EU stamp featuring Castletown, dominated by the medieval Castle Rushen, the ancient capital of Mann plays an important role in Manx history.

The 95p stamp shows an image of Onchan which has substantially grown in recent years and holds within its boundaries a number of significant, historical connections, notably Government House.

The £1.24 stamp depicts an image of Ramsey, firmly established as the capital of the North. This busy shipping port holds significant links with San Diego based vessel Star of India and the sea-faring tragedy of the paddle steamer Ellan Vannin. It is known colloquially as 'Royal Ramsey', with the Albert Tower and Queens Pier serving as reminders of monarchical visits.

The £1.27 stamp portrays Port St. Mary, a southern gem which successfully combined tourism with the more traditional fishing industry, its gentility provides a peaceful haven for strollers, families and water based activities.

Finally, the £2.33p stamp shows Port Erin, a seaside village which took advantage of a burgeoning visiting industry, its outdoors attractions include the picturesque settings of Bradda Head and Glen, the uniquely designed Milner's Tower and Breagle Glen.

Commenting on the stamps, artist and designer, Adam Berry, said: "I'm very pleased and proud to have my artwork on a Manx stamp. Especially having a whole set of the towns and villages, its ace. I'm looking forward to seeing them printed up and sending letters out to everyone I know featuring one of the stamps!"

Isle of Man Stamps & Coins General Manager, Maxine Cannon, said: "We are delighted to have had the opportunity to work with Adam on our first stamp issue for 2017. His artworks pay great homage to the burgeoning tourist trade on Island during the 1920s and strikingly capture some of our most picturesque villages and towns."

The stamp collection can be pre-ordered at www.iompost.com.