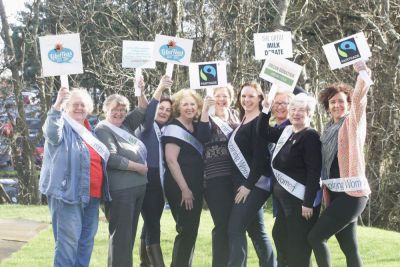 Isle of Man Post Office has been working in collaboration with the Isle of Man WI Federation to mark the Institutes centenary anniversary celebration with a brand new rose scented stamp issue due for release April 25, 2015.

The set of six stamps, marks 100 years of camaraderie and campaigning work, depicts a range of images of both the current Isle of Man WI chapter as well as some of the WIs most famous campaigns over the past 100 years, and a selection of Island members. Each stamp is set on special rose scented paper with the pink rose emblem which represents 100 years of contribution.

The WI was established in 1915 in Llanfairpwll on Anglesey with the aim of revitalising rural life and educating and inspiring women where ever their life leads them. Nowadays, the aims have widened but many WI members still join primarily to make new friends, learn and develop skills and make positive changes to their local - and in many cases national – community and the activities members engage with have changed. WI is the largest women's voluntary membership organisation in the UK and currently has over 212,000 members in 6,600 WIs across England, Wales and the Islands.

Every WI belongs to a Federation, of which there are 69 in total. The Isle of Man Federation was formed in 1950 and currently has 750 members in 30 WIs. Its members have always taken an active interest in Island life and getting involved in a huge range of activities.

Dympna Connolly, Isle of Man Federation of Women's Institutes Board of Trustees member said: "I am delighted that WI and its campaigns were chosen for the stamps. We have covered various topics in our campaigns from Equal Pay for Women, Fair Deals for Farmers, and Keep Britain Tidy to Organ Donation."

"There are no hero women in the Institute just ladies who do what they can for WI, colleagues and society, and they don't expect to get put on a pedestal. There are currently 30 WIs on Island - springs from localism and recognising you start from where you are."

"Many members are not originally from the Isle of Man but we are all committed to the Island, its heritage, agriculture, culture and language."

Maxine Cannon, General Manager of Isle of Man Stamps and Coins said: "It's hard to think of a cause over the last century that the WI haven't directly influenced. Their energy and resolve is infectious and is quite clearly as strong as it has always been, and it's for this reason we wanted to capture the WI of today by working with as many members and Institutes as possible on the stamp issue. It has been great fun compiling the issue and I believe it will be very well received. I'd like to thank all the members involved and invite all public and collectors to sample this truly unique rose scented edition."