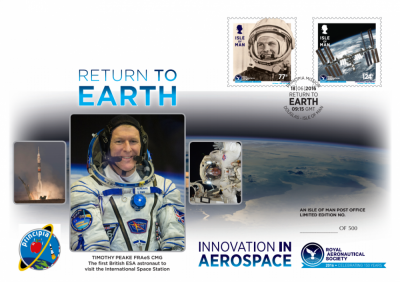 The special covers mark Major Peake's journey as the first British European Space Agency astronaut on the ISS and depict the eight stunning high-definition stamp images from the Royal Aeronautical Society 150th anniversary collection which showcase cutting-edge science and technology over the last century and a half – from the conquest of air to current developments of the Trent jet engine and Tim Peake's Principia mission to the ISS.

Major Peake signed the seven special covers on the 12 January 2016 – the actual day of the Royal Aeronautical Society's sesquicentennial.

Once back on earth the plan is for five of the seven signed covers to be loaned for display in aviation and science museums around the world – the first being the National Space Centre in Leicester. Two of the covers will be returned to the Isle of Man Post Office.

One hundred and fifty additional covers were signed by Major Peake before he began his ISS mission and are available for purchase from the Royal Aeronautical Society.

Lee Balthazor FRAeS, Past President of the Royal Aeronautical Society and Chairman of the 150th Anniversary Committee, said: "The Royal Aeronautical Society is privileged that Tim Peake has signed a limited number of 150th anniversary stamp covers. Part of Tim's ISS mission was to inspire young people with aerospace achievement and this is a main objective of our sesquicentennial celebrations. We hope that through displays of these covers in museums across the globe we will together inspire current and future generations to consider careers in science and technology and entering such an important and fascinating aerospace industry."

Maxine Cannon, Isle of Man Stamps and Coins General Manager, said: "Isle of Man Post Office was honoured when Major Peake agreed to take seven of its special covers into space with him and sign them whilst on ISS. When both Tim and the covers return to earth, these historic items will go on display at various locations in the UK and USA for all to see. The covers and other stamp collectibles in the Royal Aeronautical Society 150th anniversary collection are a demonstration of the Isle of Man's strong links with space and satellite industries."

Notes to Editors:
1. The Royal Aeronautical Society is the world's only professional body dedicated to the entire aerospace community. The Society promotes the highest professional standards in all aerospace disciplines; provides specialist information; acts as a central forum for the exchange of ideas; and plays a leading role in influencing opinion on aerospace matters. Visit www.aerosociety.com for more information.
2. The Royal Aeronautical Society was formed in 1866, so 2016 brings the Society's 150th anniversary – the sesquicentennial. The Society is celebrating the formation of the Society by looking back 150 years and forward up to 50 years with a theme of 'innovative firsts' in aerospace. The Society has an extensive and varied programme of activities to celebrate our innovative aerospace history and stimulate ideas for future achievement. Visit www.aerosociety.com/150 for more information.
3. Isle of Man Post Office is a dynamic, forward-thinking and innovative postal business which has been committed to enabling people to communicate internationally from the Isle of Man since it became a postal administration in 1973.
4. Isle of Man Post Office will celebrate the end of the Principia Mission with a new special cover timed to be released upon Tim Peake completing his mission, the cover will be available on iompost.com.
5. One hundred and fifty covers pre-signed by Tim Peake will be available to buy tomorrow (Saturday) via the Society online shop