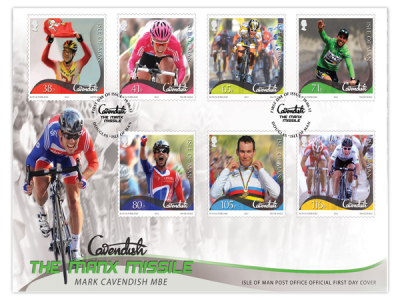 The fastest man on two wheels, cycling star Mark Cavendish MBE, will literally come to life on paper thanks to technology featured on a set of stamps being produced by Isle of Man Post Office to celebrate the athlete's sporting achievements.

A souvenir sheet of the stamps (available from June 30th to coincide with the start of Tour de France) will include an 'augmented reality' feature, allowing the £1.05 stamp with a special label to come to life using an app on a smartphone, tablet screen or other mobile device and will automatically display a video of Cavendish winning the world title in Copenhagen.

The postage stamps include images of the 'Manx Missile' winning the 2011 UCI Road World Championships and the Green Jersey in the 2011 Tour de France. Mark Cavendish said:

"I'm proud to feature in this stamp collection and delighted with the images which have been selected. It's a great honour for me personally, but it's also a reflection of the widespread interest in cycling now and that's always great to see."

As Cavendish is the Isle of Man's greatest sporting hero, the 38 pence stamp - the first in the set - features him celebrating winning gold for the Island in the scratch race at the 2006 Commonwealth Games. For Isle of Man sportsmen and women, the Commonwealth Games are the highest level of competition at which they can represent their country, and when Mark won in Melbourne he became only the second Isle of Man cyclist ever to win Commonwealth gold. Peter Buckley won the road race in 1966.

The 41 pence stamp shows Mark's first victory as a professional at the 2007 Scheldeprijs Vlaanderen in Belgium while racing for T-Mobile. In 2009, Cavendish produced a thrilling sprint finish to snatch victory in Italy's Milan-San Remo classic from Germany's Heinrich Haussler - and this win is illustrated on the 65 pence stamp. The 71 pence stamp shows Cavendish wearing the Green Jersey at the end of the 2011 Tour de France - he is the first rider from Britain or the Isle of Man ever to win the Green Jersey for the winner of the Tour's points classification.

At the road race of the UCI World Championships in Copenhagen in September 2011, Cavendish became the first British rider to win the men's title since Tom Simpson in 1965. It was an historic moment for cycling in Britain and the Isle of Man, and the image on the 80 pence stamp shows Mark crossing the finish line celebrating the greatest victory in his career to date. The £1.05 stamp shows him resplendent in the Rainbow Jersey of World Champion. Mark signed for Team Sky in the autumn of 2011 and the £1.16 stamp features an image of him winning the Kuurne-Brussels-Kuurne semi-classic in Belgium in February 2012. Cavendish also features on a 50 pence coin minted by Pobjoy Mint in the UK, on behalf of the Isle of Man Government, which will be in general circulation as well as in special celebration packs.

Six of the images on the stamps - Mark's win at the Scheldeprijs Vlaanderen, Milan-San Remo, Tour de France Green Jersey, World Championships, and in Team Sky colours at the 2012 Kuurne-Brussels-Kuurne - are by top cycling photographer Tim de Waele. The photo of Mark winning Commonwealth Games gold is from Getty Images. The stamps were designed by Ruth Sutherland and the presentation pack text was written by Isle of Man-based cycling journalist and author Richard Allen.

The Mark Cavendish MBE stamp issue goes on sale on June 19, but the sets of stamps and the souvenir sheet (featuring 'augmented reality') can be pre-ordered here