Celebrating 225 years of The Times newspaper 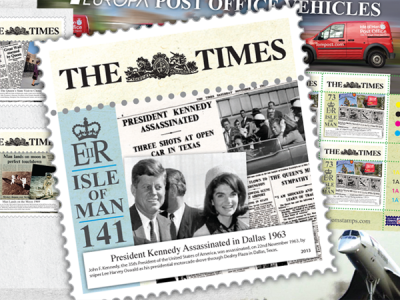 Isle of Man Post Office marks the 225th anniversary of The Times newspaper by commemorating some of the most significant events of recent history reported in this world famous publication.

The Times dates back to 1788 and has covered every news story in history. All the headlines reproduced in this unique new stamp issue, in association with The Times newspaper, capture the drama and immediacy of particular news events flashed across the world.

People of a certain age vividly remember where they were when they heard the news that President Kennedy had been assassinated in Dallas, Texas in November 1963. They can recollect the excitement and pride as England won the 1966 FIFA World Cup Final, dramatically beating West Germany 4-2 in extra time, at the Old Empire Stadium.

People can still talk about watching in awe remarkable television pictures of American Apollo XI astronaut Neil Armstrong stepping down onto the surface of the Moon in July 1969. Residents in the Isle of Man recall with particular pleasure going to a post office and buying the first postage stamps issued by their new independent Postal Authority, in July 1973.

Each one of these key moments in history are featured on the stamps as well as two other significant occasions when the supersonic airliner Concorde retired from service in 2003 after 27 years of service and Her Majesty the Queen's state visit to the People's Republic of China in October 1986 when she was shown the iconic Great Wall of China.

The six Newspaper Headlines have been carefully selected and these stamps will appeal to a wide variety of thematic collectors from those interested in aviation, American history, royalty, space, football and postal history.

"Residents of the Isle of Man, stamp collectors and non-collectors alike from countries throughout the world will find something of interest in this engaging Newspaper Headlines set of stamps. People in the Isle of Man over a certain age will well remember going to a post office and buying the first commemorative and definitive stamps issued by the new independent Postal Authority, in July 1973, 40 years ago."

Please visit our website here to find out more about our Newspaper Headlines collection of stamps and products and to pre-order.