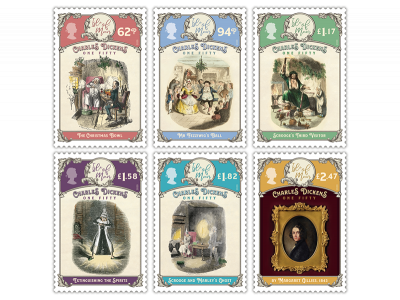 This year marks the 150th anniversary of the death of Charles Dickens, one of the world’s most famous and loved writers. To celebrate, the Isle of Man Post Office working closely with the Charles Dickens Museum, London, will publish on the 14th October 2020, a set of six carefully curated stamps featuring five engravings from his most famous book A Christmas Carol and a miniature portrait of the author from the same period as the book was written.

Even today ‘A Christmas Carol’ remains in print and a year does not go by without another adaption of the story on stage or screen. At over 175 years since its first publication, Dickens is inseparably connected to our ideas of the modern Christmas because of the enduring storytelling and characters of A Christmas Carol having continued relevance.

The highest value stamp features the ‘lost portrait’ of Charles Dickens, depicting the literary star at the age of 31. The painting was lost for over 130 years, and recently, miraculously, turned up in a box of trinkets in South Africa. Art dealers Philip Mould & Company formally re-identified the portrait and it now resides in the Charles Dickens Museum, London.

Cindy Sughrue, Director of the Charles Dickens Museum: "This has been a wonderful collaboration to mark the 150th anniversary and to highlight the Museum and its extraordinary collection. Considering that Margaret Gillies' portrait of Dickens was lost for over 130 years, it’s quite something to see it presented so beautifully on a stamp. We’re absolutely delighted with this commemorative set and its celebration of the timeless qualities of A Christmas Carol."

Actor Simon Callow, Patron of the Charles Dickens Museum, said, "I am really very happy to be returning to the Charles Dickens Museum, one of my absolute favourite places on earth, to support the launch of this splendid suite of stamps. John Leech's sketches were the very first illustrations of characters that had only just formed in the imagination of Charles Dickens and would soon become fixed in the hearts and minds of his readers. It's a particularly nice touch that they're joined in this set by the 'eagle-eyed' portrait of Dickens, which captures him when he was in the midst of creating them."

Maxine Cannon, General Manager Isle of Man Stamps & Coins, said: “It is with immense pride that we commemorate Britain’s Greatest Writer and his work ‘A Christmas Carol’ which is inextricably linked to Christmas. We would like to thank the Charles Dickens Museum for their guidance and permissions and Simon Callow for his support in bringing this wonderful collection to life. We are delighted to be able to offer our support to the Charles Dickens Museum to help them continue their incredible work in keeping such a prominent influence in the public eye.”

The ‘Charles Dickens - 150’ collection is available as a Set and Sheet Set, Presentation Pack and First Day Cover and a limited edition of First Day Covers signed by Simon Callow. For further information, please visit www.iompost.com/dickens