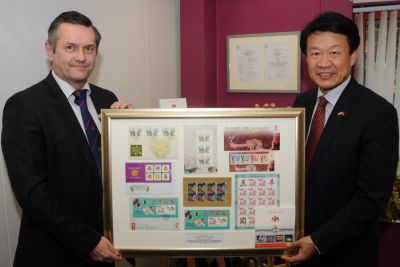 Consul General Li, who heads up the Manchester Consulate of the People's Republic of China together with his wife Madam Li, Consul Zhao and Consul Wu and representatives from the Isle of Man Chinese Association visited Isle of Man Postal Headquarters for a tour of its operations on Friday January 16.

The visit which included a tour, introduced the delegation to the Island and the Post Office's role in serving businesses and individuals. Following some introductions from the Post Office Chairman and Chief Executive, the delegation and representatives from the Isle of Man Chinese Association were taken on a comprehensive tour which gave them an insight into the Post Offices mails and specialist communications division, IMS. The visitors were then treated to a series of presentations from senior Post Office staff before enjoying a "Manx Tay" using all Manx produce. To mark the occasion Consul General Li was presented with a gift – a framed set of Isle of Man Post Office Chinese stamp issues which included the latest Year of the Sheep miniature sheet, which was released for sale on January 2, 2015.

Consul General Li arrived in Manchester in October 2014, and has assumed responsibility as the tenth Chinese Consul General in Manchester. He began his foreign affairs career in 1978 from the Foreign Affairs Office of the People's Government of Anhui Province of China, where he worked until 2009 as its Director General with several overseas postings. Prior to his current position Consul General Li served as Minister-Counsellor of the Chinese Mission to the EU from March 2010 - September 2014.

The aim of the recent visit was to promote and strengthen Post Office ties with China resulting in greater opportunities for business between the two countries, with Stamps and Coins and IMS pick and pack services specifically in mind to begin with.

Stamp collecting is currently declining in the West but is experiencing growth in the East where at least a third of the world's 60 million stamp collectors are now in China and the numbers rapidly growing! The Post Office has been developing working relationships in China and the Far East since the Beijing Olympics in 2008. This has resulted in new revenue streams for the department with well established relationships with the likes of the China National Philatelic Corporation to promote its stamps in China. Since its inaugural meeting and formation in September 2013, the Isle of Man Chinese Association, have also assisted the business on a number of projects, including its first miniature sheet of 2015 celebrating the Chinese New Year of the Sheep, which has so far been extremely well received generating key sales in China and Hong Kong.

In addition, the Post Office working in partnership with Department of Economic Development has been promoting the Isle of Man as a gateway to the UK and Europe for Chinese companies wishing to build market share in the dispatch of their goods and management of returns. With its online Customs clearance agreements and it being part of the UK VAT arrangements together with a wealth of professional expertise the Isle of Man is an ideal location. The Post Office can provide businesses with warehousing facilities for goods, fulfilment of daily orders for items to the UK and Europe and it can also offer management of the returns process.

Graham Cregeen MHK, Chairman of Isle of Man Post Office said: "Our business philosophy is about building relationships. We aim to bring the world closer to our customers' doorsteps creating a global community. For this reason we were so pleased to see that such a small Island in the middle of the Irish Sea can play a part in a major world economy. We were delighted that Consul General Li and his delegation took the time to visit us. Their recent visit was a great success and we highly enjoyed the afternoon and believe that both sides left having forged the beginnings of a lasting relationship."