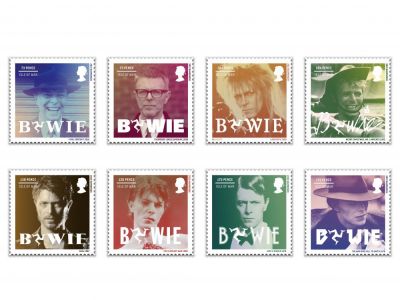 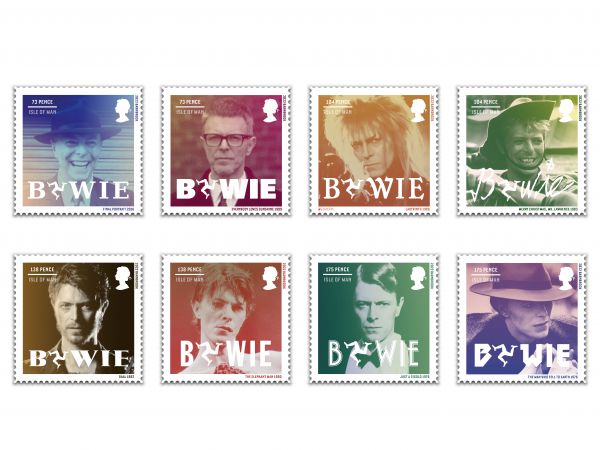 The new ‘David Bowie: Actor’ collection of eight stamps including Labyrinth, The Man Who Fell to Earth and Merry Christmas, Mr. Lawrence, goes on sale 12 September

David Bowie’s acting career is to be celebrated with a set of eight postage stamps from the Isle of Man Post Office. The ‘David Bowie: Actor’ stamps, which go into circulation from 12 September, honour five Bowie films as well as his Broadway performance in The Elephant Man, the BBC television adaptation of Bertolt Brecht's play Baal and a special stamp titled ‘The Final Portrait’ which shows Bowie in his last photoshoot.

The stamp set and additional products have been designed by multi award-winning designer Jonathan Barnbrook who collaborated closely with Bowie, designing all his album releases since the 2002 album Heathen to his last album named ★ (Blackstar) in 2016. He was also artistic adviser and part designer of the Victoria and Albert Museum exhibition ‘David Bowie Is’. Barnbrook received two Grammy nominations for his David Bowie covers, winning one of them for ★.

The David Bowie acting performances featured in the stamp collection are his roles as Bernie in Everybody Loves Sunshine (filmed on the Isle of Man in early 1998), Jareth the Goblin King in Labyrinth, Major Jack Celliers in Merry Christmas, Mr. Lawrence, the title role in Baal, John Merrick in The Elephant Man, Paul Ambrosius von Przygodski in Just a Gigolo and Thomas Jerome Newton in The Man Who Fell to Earth.

Produced in the 75th anniversary year of the birth of David Bowie, and also marking 40 years since the BBC television adaptation of the play Baal, the stamps and other related products will be part of a wider presentation pack, also designed by Barnbrook.

Jonathan Barnbrook commented, “I started working on the ‘David Bowie: Actor’ stamp collection several years ago, and in that time, an incredible amount of work has been done to get this collection to where it is now, and to be something the fans will be happy with. I worked with Bowie for over thirteen years on his record covers and the team at the Isle of Man Post Office saw the level of detail that I go to, the kind of knowledge I have, and the efforts I would make to ensure these stamps were right.

I didn’t want to create just another series of nice pictures of David Bowie from record covers. The stamps had to have a connection to the Isle of Man, which is where Everybody Loves Sunshine comes in, but they also needed to show something about Bowie’s career that hadn’t been fully explored, which is why we concentrated on his achievements as an actor. There are the films that everyone knows about, but there have been some incredible acting milestones which are less discussed, particularly his performance on stage in The Elephant Man, and Baal, where Bowie managed to bring together both the avant-garde and the mainstream in one character performance.”

Mark Kermode, Chief Film Critic for The Observer added, “Perhaps my favourite Bowie performance was in the 1982 TV production of Baal, not least because everyone I knew at school watched it go out on the BBC, and then spent the next few days talking of nothing but Bertolt Brecht! Bowie had that power to inspire – to take on different roles, explore different characters, and (crucially) to take his audience with him. We were all grateful to be part of his journey; a journey reflected in this fine collection of Manx stamps.”

The Isle of Man Post Office has paid tribute to performers before, and last November it published a seven-stamp Sir Barry Gibb set, which celebrated the musical career and charitable work of the singer/ songwriter/ producer, who is famously from the Isle of Man.

Explaining the decision for the tribute to Bowie, Maxine Cannon of Isle of Man Post Office said: “For five decades David Bowie was at the forefront of contemporary culture, and has influenced successive generations of musicians, artists, designers and writers. The Isle of Man Post Office’s stamp issue celebrates this unique figure and some of his many celebrated personas. We are incredibly proud to present David Bowie as an actor in this set of eight stamps spanning fifty years of his remarkably varied career. The set also celebrates his performance in Everybody Loves Sunshine, filmed on the Isle of Man.”

Additional products available to purchase include the ‘BowieBox’ which contains a full-colour prestige stamp booklet in which Nicholas Pegg, one of the world’s leading authorities on the life and work of David Bowie and author of The Complete David Bowie, places Bowie’s film and stage career in context with commentary on all eight of the commemorative stamp subjects. The box is completed by a set of nine deluxe stampcards. Sets of the special stamps, presentation packs, commemorative sheetlets, first day covers and related products can be pre-ordered from the Isle of Man Post Office now: iompost.com/Bowie