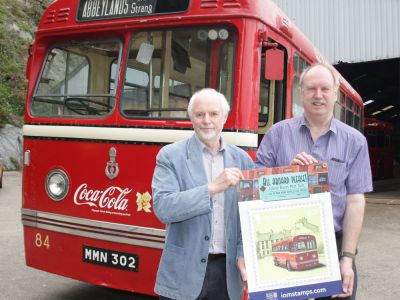 Isle of Man Post Office is proud to present a colourful collection of six stamps depicting a selection of Manx public transport buses which entered service on the Island during the 1930s and 40s. The images have been specially commissioned by local artist Peter Hearsey and 2016 marks the 40th anniversary of Isle of Man National Transport. The issue is due for release on 15th July 2015.

The Island's rich transport heritage is exemplified in this beautiful set of stamps entitled 'All Aboard Please! Manx Buses Part Two'. The stamps augment the 'All Aboard Please! Manx Buses Part One' issue of 1999 and feature Manx buses from both the Douglas Corporation and Road Services fleets, which subsequently amalgamated to become Isle of Man National Transport on 1 October 1976.

Peter Hearsey is a well renowned automotive history artist who studied at Kingston-Upon-Hull College of Art from 1960-1964. After working in London for many years within advertising, visualisation and illustration, Peter then moved to live on the Isle of Man in 1977. The artworks used in the issue showcase a selection of vintage buses from bygone days on the Island and are depicted using a modern style of art. To add to this, each bus image on the stamps is picked out in creative SPOT UV varnish for a luminous, bright finish.

Douglas Corporation Transport yellow buses feature on the 44p, 93p and 186p stamps. The Leyland Cub KPZI is illustrated on the 44p stamp outside the now demolished Omnibus Depot, the 93p shows the Daimler CWA6 stamp outside Douglas Railway Station and the 186p stamp sees the AEC Regent 1 on Prospect Hill, Douglas.

The text that accompanies the stamps has been prepared by well-known local author and transport historian Richard Davis, commenting on the stamps he said: "I am delighted to see the results of our work on this project. Peter has produced a series of fantastic images which perfectly capture Manx buses of the 1930s and 40s and Isle of Man Post Office can be very proud of their latest stamp issue."

"I am sure the issue will be very well received by the general public, stamp collectors and vintage transport enthusiasts alike and I look forward to getting a set to add to my collection".

Maxine Cannon, General Manager, Isle of Man Stamps and Coins also said: "We are delighted to present this fantastic set of stamps which strikingly capture the Islands rich transport heritage using illustrations by local artist Peter Hearsey and text from well-known local author and transport historian Richard Davis. This issue which ties in with the forthcoming Isle of Man National Transport 40th anniversary in 2016 would make the perfect addition to any bus enthusiast or stamp collector."