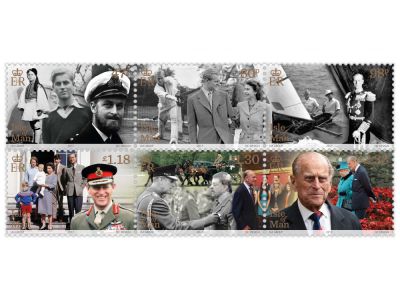 Isle of Man Post Office is honoured to present six se-tenant pairs of stamps in recognition of a lifetime of service by HRH Prince Philip, Duke of Edinburgh. The stamps will be issued on June 10th, Prince Philip's 96th Birthday, ahead of his official retirement date in September.

Paying tribute to HRH Prince Philip, Simon Weston has commented: "Every time I've met him over the years he has always been the same – he shoots from the hip and is not in any way flowery. He loves a laugh and is very very funny. At 95 he has earned the right to come out of the public spotlight. He might be retiring but he's far from meeting his mortician."

The accompanying issue text was kindly prepared by the late Peter Jennings and describes Prince Philip's life and achievements. HRH was born on June 10th in 1921 into the Greek royal family. He joined the British Royal Navy when he was 18 where he graduated as top cadet, and was commissioned as a midshipman in 1940. At the age of 21, HRH was then promoted to the rank of first lieutenant; he was one of the youngest in the Royal Navy.

In 1939 Philip was asked to escort the King's two daughters during a royal visit to the Royal Naval College, Dartmouth, and then, following an exchange of letters with Princess Elizabeth, in 1946 Philip asked the King for his daughters hand in marriage. The royal engagement was officially announced on 9th July 1947, and they were subsequently married at Westminster Abbey on 20th November in 1947. After the birth of Prince Charles and Princess Anne, Philip returned to the Navy before ending his naval career in July 1951.

When Elizabeth was crowned Queen in 1952 the family took up residence at Buckingham Palace, where Prince Andrew and Prince Edward were born in 1960 and 1964 respectively.

Throughout his life Prince Philip has always been a keen artist, carriage driver, polo player and yachtsman, and founded the Duke of Edinburgh's award scheme for 14-24 year olds in 1956.

Over the years the Duke of Edinburgh has been patron of more than 800 organisations, served as UK president of the World Wildlife Fund 1961-1982, and acted as chancellor for the Universities of Cambridge, Edinburgh, Salford and Wales.

To add to this, he has been by the Queen's side to celebrate all her Jubilees and accompanied her on many of her state visits.

Prince Philip is the longest serving, oldest spouse of a reigning monarch and the longest living male of the British Royal Family.

The six opulent se-tenant pairs of stamps contain gold text and stunningly capture Prince Philip at key moments in his life from childhood to present day. The six stamp are priced at 47p, 60p, 98p, £1.18, £1.30 and £2.33, and the collection is available in a set, presentation pack, sheet and first day cover.

Maxine Cannon, Isle of Man Stamps and Coins General Manager, said: "We are pleased to pay tribute to HRH in recognition of his lifetime of service to the British monarchy on the occasion of his retirement from royal public engagements.

We would like to thank Simon Weston CBE for his contribution and acknowledge the substantial contribution from highly esteemed text writer, Peter Jennings."

The Prince Philip, Duke of Edinburgh, A Lifetime of Achievement stamp issue can now be pre-ordered at http://www.iompost.com/princephilip.