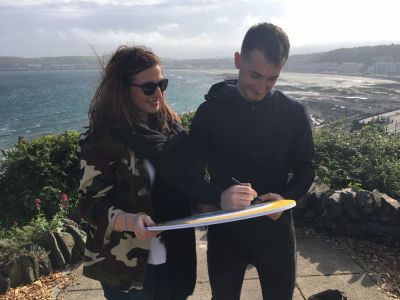 Presentation Boards of the 30th Anniversary £2 Hislop Coins are being signed by TT Riders and VIPs until after the Manx Grand Prix Classic TT in August this year.

This year's Isle of Man Classic TT will celebrate the life and career of Steve Hislop, one of the greatest British motorcycle racers of all time. Entitled 'Back to the Future: The Hizzy Years', this celebration will take place 30 years after Steve set the first ever 120mph lap around the TT Mountain Course, a speed that remains a benchmark for competitors three decades on.

The Boards were used last Friday when we presented the Hislop Family, represented by Connor Hislop, with three numbered editions from our Limited Edition £2 Coin & Stamp Gift Pack (read the full story here).

The Boards will be auctioned off after the Manx Grand Prix in August and proceeds will be donated to the TT Riders Association.