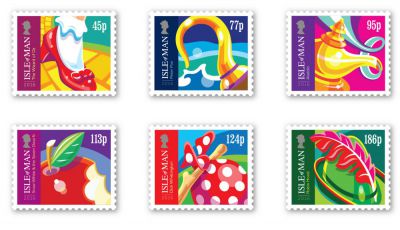 Isle of Man Post Office is pleased to present a vibrant and fun filled set of stamps celebrating the world of pantomime at Christmas, highlighting some of the most iconic shows around with particular reference to those that have graced stages across the Isle of Man. The stamps will be issued on October 20th and have been designed and illustrated by The Fresh Group with text provided by Christopher Biggins.

Pantomime (informally panto) is a wonderful British institution; it is as much a traditional part of Christmas as turkeys and Christmas trees. The accompanying stamp issue text which tells the story of pantomime has been prepared by British panto performer, Christopher Biggins.

Christopher Biggins has over 40 years performing in pantomimes; he is the undisputed Grand Dame of British theatre and boasts an impressive stage career and active radio and TV chat show presence, as well as playing roles in TV sitcoms, period dramas and cult shows.

In the text, Biggins tells the story of panto... Panto has its roots in Ancient Greece, but pantomime shows, as we know them today, came into being in the mid-19th century as a way of presenting a children's fairy-tale and this was then further developed by the great impresario, Sir Augustus Harris, manager of London's Drury Theatre. Panto has become an extraordinary part of British theatre and every town in the country produces a pantomime, amateur or professional. Audiences both young and old are encouraged to get involved in the singing, booing the villains and warning the heroes "he's behind you!!"

Christopher Biggins is no stranger to the Isle of Man and has shared his expertise and enthusiasm with Manx amateur performers through his involvement with local pantomime competitions including The Battle of the Pantos where he was head judge in 2015.

The Isle of Man has a rich culture in pantomime with amateur productions at parishes across the Island and professional productions at its legendary Gaiety Theatre. This year The Wizard of Oz is being performed at the Gaiety and promises to be a spectacular show.

The collection of six stamps features iconic images from some of the nation's favourite pantomimes. Each stamp incorporates a metallic silver Queen's head, an iconic image and an array of vibrant colours. The 45p stamp shows an image of the ruby slipper from The Wizard of Oz, the 77p stamp depicts Captain Hook's hook from Peter Pan, and the 95p stamp features the lamp from Aladdin. Snow White's rosy red apple is featured on the £1.13 stamp with a bite taken out; a £1.24 stamp features an image of Dick Whittington's bag and stick, and finally, the £1.86 stamp features Robin Hood's hat.

Christopher Biggins, said: "Wow...Christmas Panto Stamps! I had to be involved!! Love the Isle of Man for asking me. Much Love "Dame" Biggins."

Maxine Cannon, General Manager of Isle of Man Stamps & Coins, said: "We are pleased to present our Christmas stamps for 2016 with a set of iconic images from one of the seasons best loved traditions, the pantomime. We hope that both those sending their post at Christmas and collectors alike will enjoy these beautiful stamps."

The stamp collection is available to pre-order from today and can be purchased at www.iompost.com/panto