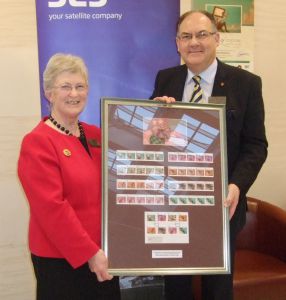 On Monday afternoon Isle of Man Stamps and Coins and key representatives from the Post Office attended the official launch of the Island of Culture 2014 and stamp collection exhibition at the Villa Marina. The exhibition available to the public includes a collection of stamps reflective of eight cultural topics and will last for three weeks.

The collection produced and exhibited by Isle of Man Stamps and Coins showcases its latest issue which has been designed by Manx artist Juan Moore in addition to those with island links produced in the last 40 years. The exhibition is split into the eight themes in line with the latest issue – dance, drama, music, literature, visual arts, design, film and craft.

Geoff Corkish MBE MLC, Chairman of Isle of Man Post Office commented: "2014 will be a vibrant and highly celebratory year. Events held over the duration will be a chance for everyone to celebrate our island of culture through dance, music, theatre, the visual arts, cultural festivals, film and digital innovation and lay a lasting legacy for creativity on the Isle of Man. Juan Moore's fabulous and outstanding Island of Culture stamp issue further adds to the celebrations. The stamps were specially created and show eight aspects of Manx culture."

Michael Lees, Island of Culture Director said: "The Island of Culture 2014 stamps are iconic. Juan Moore the Manx artist who was commissioned to design these stamps has caught the imagination in his designs. They depict all aspects of the arts in a way that will appeal to all generations. I am delighted that they have gone on sale throughout the world and will arouse an interest worldwide. His daily blog throughout 2014 will continue the interest in his work and Island of Culture."