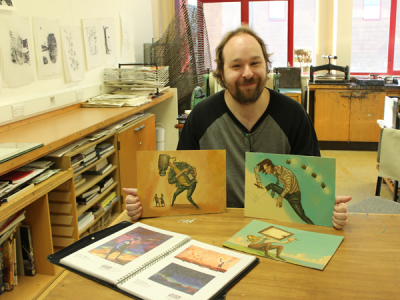 A year-long festival of the arts will be staged in 2014 to mark the Island of Culture and coinciding with the launch on January 6 will be the release of a celebration issue of stamps.

Born and raised in the Isle of Man, Juan Moore is a talented Manxman with degrees in illustration and computer animation respectively. His artwork has found acclaim in exhibitions featured in Cornwall, Wales, London, France and New York. Some of Juan's artworks are part of both the Isle of Man Arts Council's collection and the Manx National Art Collection.

His latest work will feature on a set of stamps to celebrate the Island of Culture having been commissioned to produce the new artwork celebrating eight cultural topics - dance, music, drama, literature, visual arts, design, film and craft, by Isle of Man Post Office. The stamps are Isle of Man Post Office's contribution to the lasting legacy of the Island of Culture 2014 and Juan admits having his work showcased in this way is a real honour.

"It feels so good to have my artwork on the Island of Culture stamps. Art is always something that people have an opinion on and I hope my work will be noticed on these stamps. It is important to me that my work is not only thought-provoking, but that it is accessible to everyone. One of the aims of my work is for it to be as understood by not only those from an art background, but for someone who knows nothing about it" he said.

Juan added: "I generally get my ideas for my art from everyday life and once I have an idea I just paint. I'm a big fan of the white page and don't always know where my journey is going to take me and what the end result is going to be like until I get painting. I love having something physical at the end of it and I'm really looking forward to seeing the actual stamps when they are issued in the New Year."

Maxine Cannon, General Manager Isle of Man Stamps and Coins said: "We are delighted to be involved in the Island of Culture and our set of eight stamps, kindly designed by Juan, will be launched in conjunction with the actual launch of the festival on January 6. Culture means different things to everyone but there is set to be something to suit every taste throughout 2014, with a colourful spectrum of events planned by the Isle of Man Arts Council to celebrate the richness of our Island and its cultural scene."

Photo: Juan Moore with his original paintings which will feature on the Island of Culture stamps issued on January 6, 2014.