Isle of Man Christmas Scenes – A Time Gone By 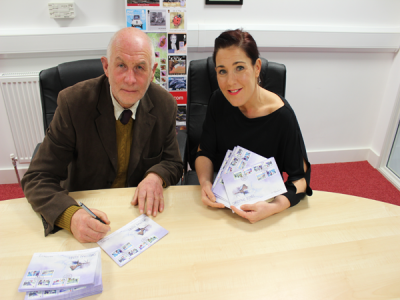 The Isle of Man Post Office is pleased to present a set of six stamps which feature original artwork by Island based artist Michael Starkey.

This delightful stamp issue depicts images taken from black and white photographs of old buildings and streets that no longer exist on the Isle of Man but brought back to life in colour with memories and research.

The 38p stamp shows shoppers with the Christmas tree lights at the Courthouse in Ramsey which is now Ramsey Post Office. The lights give cheer and hope in the cold, frosty night with quite often the brass band playing and choirs singing. This painting shows a group at about six o'clock on Christmas Eve. It's about that time that people start to think "Have we got everything?"

The 41p value depicts a postman delivering in Glen Auldyn. Michael Starkey says: "I wanted to paint a rural picture of a postman delivering mail at Christmas. When I was a postman in Ramsey, I delivered mail in town to all the little streets in South Ramsey which are now long gone. The rural drivers would tell me stories about Christmas Day deliveries and how, quite often, the vans would have to be dug out of the snow. Here we see a Morris 1000 van and the postman in Glen Auldyn on the outskirts of Ramsey just before dark. It was often quite late into the night before some of them returned.

The 71p stamp features a small choir with a couple of late shoppers outside Castletown Police Station. A policeman keeps a watchful eye to keep the town safe and secure on Christmas Eve. The castle looms large in the background as the lights are on in the station, where a mince pie and a cup of tea are waiting before he ventures out on his rounds. Soon the lights will dim and peace and quiet will reign for Christmas.

Light fading on Christmas Day in Sulby Glen is the subject of the £1.05 value.The light is on in the cottage and the lady and dog are looking forward to a warm fire and some mince pies with the family, before the frost sets in for the night. Michael Starkey says: "This is the atmosphere I like to create, that feeling just before dark in the winter when it seems to glow before night. Sulby Glen is a magical setting just made for a painting."

The £1.16 stamp features a painting set in the 1960s when Martin's Sweetshop, situated just across the road from the cinema in Ramsey, was a wonderland for all who stepped inside. Rows of sweet jars and decorations hung in every part of the shop giving a riot of colour. Here the lights are on in the shop as Christmas Eve approaches. The children who are playing are waiting for the big day with the promise of a matinee and a selection box.

Lake Lane in Peel is the scene of the final stamp in this collection. It's Christmas Day, it's stopped snowing and children, excited by the snow, race out to play. In days gone by, after Christmas dinner, there was a short time before dark when children went to their friends' houses to play and came back to a warm fire and a big tea. Evenings would be spent playing games and listening to the radio. These lanes in Peel were a perfect playground not far from the house.