Isle of Man Constabulary to feature on stamp issue 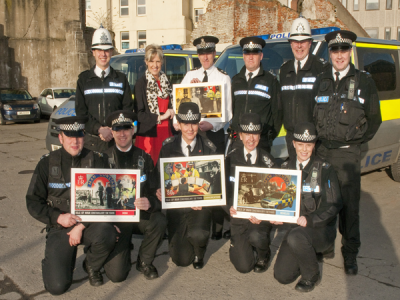 A set of stamps have been unveiled which will mark the 150th anniversary of the Isle of Man Constabulary.

Recently Inspector Derek Flint and members of the Isle of Man Constabulary gathered for a photo presentation of the new stamps with Lucy Webster-Thompson of Isle of Man Post Office. The stamp issue illustrates the history of the Island's police force from its formation in 1863, how much it has changed with each stamp featuring the modern day constabulary along with an image from a time gone by.

Isle of Man Constabulary protects the safety and livelihood of the residents of the Isle of Man on a daily basis and works to reduce crime and enhance the quality of life we all enjoy. During its existence there have been many milestones most notably a pay increase for all ranks implemented in 1947 along with the establishment of an Island Police Federation, the Island's first police dog in the 1960s, the appointment of the first ever police woman in 1967 to the force increasing in size in the eighties and nineties.

"We feel immensely privileged to serve the Isle of Man and play our part in keeping it safe. To have our 150th anniversary commemorated in a stamp issue that will be seen the world over and enjoyed by collectors and recipients of mail alike, is in itself something to celebrate. We hope that the images from yesteryear, contrasted with the ones from more recent times, will illustrate how far we have come and how the finest traditions of the Island's Constabulary remain at the forefront of what we do."

"The history of the Isle of Man Constabulary is fascinating, the force has evolved and changed so much not just in its size but advancements in technology have really changed the way it can operate, in terms of communication for example. 2013 will not only be their 150th anniversary but there will be another major significance – the appointment of Gary Roberts as the first Manx Chief Constable, a real completion to the force's history to date."

Please click here to find out more about the Isle of Man Constabulary 150th Anniversary collection of stamps and products and to pre-order.