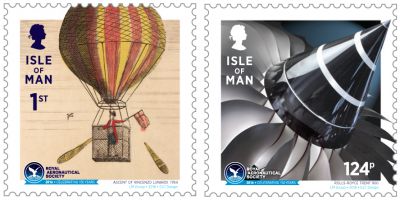 Established in 1866, the RAeS is the world's only professional body dedicated to the entire aerospace community. The Society promotes the highest professional standards in all aerospace disciplines and acts as a central forum for the exchange of ideas whilst pledging a leading role in influencing opinion in aerospace matters.

Mankind fulfilled its dream of flight in France in 1783 with Vincenzo Lunardi undertaking the first hydrogen balloon flight in Britain the following year. Man travelled by balloon in the skies for almost 120 years before the first powered controllable aeroplane was created. Since then we've seen the evolution of aeronautics from the Wright Brothers flight in 1903, to Russian cosmonaut Yuri Gagarin becoming the first person in space and to orbit the Earth in 1961, and all the great aeronautical achievements following these expeditions both by Man and machine.

The set of stamps explore in beautiful colour and high definition a remarkable history of aerospace innovation and exploration. Included within these is Vincenzo Lunardi's hydrogen balloon in 1784 depicted ascending from the Honourable Artillery Company's training grounds at Moorfields. Also pictured as a more recent example of mankind's achievements is the Rolls-Royce Trent 900 turbofan engine, one of the company's most successful jet engines, and the fourth generation of the Trent family of engines driving the future of airliner design. Finally, the stamps incorporate an ingenious selective varnish and metallic
over-layered print technique, adding shine and lustre to the set.

Lee Balthazor FRAeS, Chair of the RAeS 2016 Celebrations Steering Committee, said: "The development of this stamp collection with the Isle of Man Post Office has been an exciting project for the RAeS and the National Aerospace Library and has sparked plenty of intellectual debate about the key advances in the history of aeronautics. I am proud that this collection will provide a unique record of some of the most important innovations in aerospace science and technology as we celebrate the 150th anniversary of the RAeS."

Maxine Cannon, General Manager of Isle of Man Stamps and Coins said: "Isle of Man Post Office is honoured to work alongside the Society to mark its important anniversary with these stamps. Aeronautics is a subject that inspires a wide range of exciting ideas. The images and narrative included with the stamps helps to recall a fascinating story of scientific aeronautical endeavour. It was a pleasure to create the collection which is a must have for those with an interest in aeronautics and aviation."

To view the stamp collection and pre-order please click here. The stamps will be available across the Post Office network and for purchase online at iompost.com from 12th January 2016.