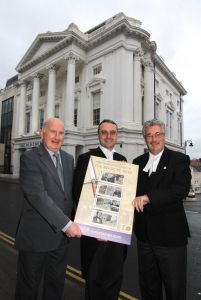 Isle of Man Post Office is pleased to present a set of stamps in celebration of the 150th anniversary of the first general election of the House of Keys. Four panoramic stamps illustrate the most significant events and individuals that led to the transition to free elections, and are due for issue February 13th.

The call for political reform started in earnest in 1833 when Robert Fargher launched the dissenting newspaper the 'Mona's Herald' and became involved in a campaign to bring about a democratically elected House of Keys. Fargher's inflammatory "letters to the editor" resulted in libel action being taken against him by a Member of the House of Keys, and he was subsequently imprisoned. Following this, public petitions for political reform were presented, however none progressed.

Then in 1864 the forceful 'Isle of Man Times' newspaper owner, James Brown, reported on the proceedings of the House of Keys in which a Member spoke about the wish of Douglas Town Commissioners to extend their powers, but his newspaper reported that "this elicited marks of approval of the 'don-keys' around him". As a result, he was found guilty of contempt, imprisoned but was later released on appeal.

In 1863 Henry Brougham Loch was appointed Lieutenant Governor. The gravity of the urgent need to have sufficient money to complete the building of a new breakwater, the calls for a democratically elected House of Keys and the acrimonious incident with James Brown convinced Loch that there should no longer be taxation without democratic representation. Following confidential negotiations with the British authorities, the House of Keys eventually agreed to the election of its Members by the people of the Isle of Man in return for additional revenue for public works raised through increased customs duties. Loch sent the 'House of Keys Election Act, 1866' to the Home Office for Royal Assent which was then promulgated by Tynwald Court.

The first public election of the House of Keys took place during the period from 2nd to 5th April 1867 and saw 13 of the previous 24 Members elected. The reforms were major steps towards more competent and mature self-government, and political democracy becoming a reality.

The story of the reforms begins with the £2 stamp which depicts Robert Fargher, the Castletown House of Keys and 'Mona's Herald' masthead. It continues with the £1.50 stamp which shows Castle Rushen Gaol, 'Isle of Man Times' newspaper and James Brown. The penultimate £1 stamp features Castle Rushen, the Proclamation for Dissolving the House of Keys and Henry Loch, and the final 1st Class stamp in the set depicts Douglas Court House on Election Day, Speaker of the first publicly elected House of Keys John Senhouse Goldie-Taubman, the Register of Electors and the Election Poll Book 1867.

President of Tynwald, the Hon Steve Rodan MLC said: "These stamps mark a significant milestone in the life of Tynwald which is the world's oldest continuous parliamentary assembly - the holding of the first democratic popular elections to the House of Keys in 1867. While the vote was then given only to property owning males, a few short years later the Isle of Man became the very first place to give women the vote - in 1881, decades before the UK."

"I congratulate Isle of Man Post Office for the excellent quality of this special stamp issue, which vividly depicts Election Day in 1867. They will surely be very popular with the public and collectors the world over - the Island already has a very high reputation for its stamp issues, for their design and appeal, and these stamps are no exception."

"The people of the Isle of Man recognise the long tradition of Tynwald as being a great symbol of our nationhood. I have no doubt that this stamp issue celebrating Manx democracy is set to promote this national pride to the wider world."

Maxine Cannon, Isle of Man Stamps & Coins General Manager, said: "Isle of Man Post Office is pleased to celebrate this tremendous event in Manx history, the 150th anniversary of the first general election of the House of Keys, along with the most significant events and people in the story."

"We'd also like to thank Wendy Clucas and Cathy Clucus of the Manx Library for their invaluable expertise with the subject and Dr Kit Gawne who prepared the accompanying stamp text."

Visit www.iompost.com to pre-order the stamps and visit http://www.tynwald.org.im/education/history/1867/ for more information on the 150 year anniversary celebrations.