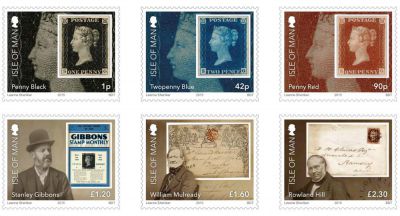 Isle of Man Post Office is pleased to present its latest stamp issue produced in collaboration with Stanley Gibbons marking the 175th Anniversary of the Penny Black, the world's first adhesive posting stamp used in the public postal system, and the birth of Edward Stanley Gibbons. The issue is due for release February 17, 2015.

Postage rates on the Isle of Man and the rest of the British Isles had risen to a very high level by 1830 and as a result a campaign to reform these was led by Roland Hill with the main aim of lowering the rate to one penny per half ounce. This in addition to introducing a method to signify if a letter had been pre-paid was developed by William Mulready. The first step towards a change in the postal system then occurred on December 5, 1839 when the rate was reduced to four pence. This was a success and the penny rate was introduced January 10, 1840. At first the postage paid or due was written in ink on the letter by the postmaster and then on May 6, 1840 a new method of paying postage was introduced and the famous Penny Black was born, followed by the TwoPenny Blue on May 8, 1840.

A number of devices were incorporated in the designs to prevent forgery including stamps being printed by the recess method, paper specifically made with a small watermark on each stamp, a machine used to make intricate background patterns, and the use of unique corner letters with each stamp on the printing plate of 240 stamps having a different combination of corner letters.

The Penny Black and TwoPenny Blue were resounding successes. The 1840 stamps were found to be easily cleaned of the red cancellation and reused and this prompted a colour change to Red for the Penny Black stamp with new stamps issued in 1841.

Six stamps have been produced and include depiction of the Penny Black, the Penny Red which replaced the Black and the TwoPenny Blue. In addition, there are three stamps each with a key individual - William Mulready, Roland Hill and Edward Stanley Gibbons whose portraits are featured on the stamps next to their associated contribution.

Edward Stanley Gibbons was born on June 21, 1840, interestingly in the same year that Britain issued the Penny Black. Gibbons interest in stamps began whilst at school and he started the business Stanley Gibbons Ltd when employed as an assistant in his father's pharmacy shop in Plymouth where he set up a counter selling stamps in 1856.

Stanley Gibbons is the world's oldest rare stamp merchant with world-leading experts at the heart of everything it does. It is this adherence to quality that gained Stanley Gibbons the Royal Warrant in 1914. The company continues to serve collectors, philatelists and numismatists all over the world, host auctions and publish highly respected journals.

Dean Shepherd, Editor of Gibbons Stamp Monthly said: "It was fitting that Stanley Gibbons had the opportunity to work with Isle of Man Post Office on this very special issue, which not only marks the 175th Anniversary of the world's first stamps—and thus the birth of stamp collecting—but also the birth Anniversary of Stanley Gibbons, whose name has been synonymous with the hobby for almost 160 years."

"As well as what would have been Stanley Gibbons' 175th birthday, 2015 also marks the 125th Anniversary of Gibbons Stamp Monthly magazine—which I am delighted to see depicted on the £1.20 value."

"The fact that the stamps have also been designed by Leanne Sherliker of Benham, part of the Stanley Gibbons' family of companies, makes this issue all the more special in this very important year for Stanley Gibbons and serves as a very attractive tribute to the 175th Anniversary of the Penny Black."

Maxine Cannon, Stamps and Coins General Manager said: "The stamp issue is important to the Post Office in a number of ways; the launch of the Penny Black marks the birth of the modern British postal system which is now used around the world. The Penny Black, TwoPenny Blue and Penny Red are icons of this achievement and even 175 years later are still popularly recognised both for their historical significance and collectors' value."

"We are also of course extremely pleased to be working alongside Stanley Gibbons who many will recognise as one of the most important philatelic and antique merchants in the world."

"This is a fantastic release and a must have for any collector."

Besides the Penny Black stamp issue a commemorative crown has also been produced featuring an image of the first postage stamp showing Wyon's classic portrait of the teenage Queen Victoria.