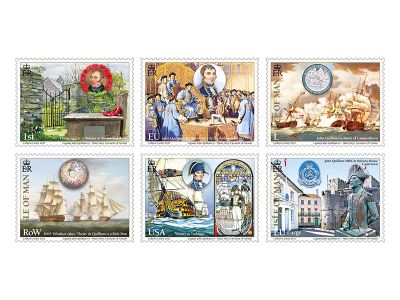 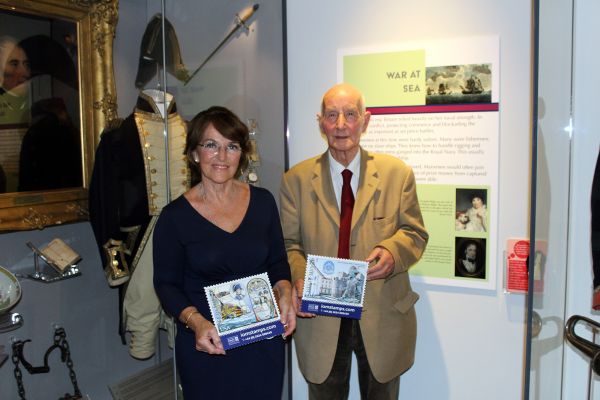 Isle of Man Post Office commemorates much celebrated Manx hero Captain John Quilliam on the 250th anniversary of his birth.  Unbeknownst to many beyond Manx shores he was First Lieutenant on HMS Victory at the Battle of Trafalgar alongside Admiral Horatio Nelson and Captain Hardy, where it is claimed that he steered the ship into battle. Shortly after his return to the Isle of Man in 1807 Quilliam was made a Member of the House of Keys, but resigned his seat in 1810 after being called back to sea to serve first in Home waters, then in the Baltic and finally on the North American Station. He was invited to resume his post as MHK upon his return in 1817.

Local designer Colleen Corlett created 6 stamps narrating the life and achievements of John Quilliam utilising photographs, portraits, statues and images of Quilliam memorabilia. The issue text was written by Frank Cowin, who, alongside Andrew Bond and Andrew Lambert, is the co-author of Favourite of Fortune, Captain John Quilliam, Hero of Trafalgar.

The collection will be issued 25th September 2021 and available as Set, Sheet Set, Presentation Pack (limited to 1100) and First Day Cover (limited to 1500). Issue text author Frank Cowin’s co-written book ‘Favourite of Fortune, Captain John Quilliam, Hero of Trafalgar’ will be available as a limited edition (50) signed & numbered by Frank Cowin and Designer Colleen Corlett and including a special First Day Cover of the ‘Victory at Trafalgar’ stamp (signed & numbered by Colleen Corlett).

Colleen Corlett, Artist and Designer said: “I have been lucky enough to earn my living as a designer-artist for the last fifty years. Fifteen happy years were spent as the in-house designer for the Isle of Man Post Office, researching and painting many aspects of the Island on stamps, before going freelance. I was delighted to be asked once again to design a stamp issue, this time about the life of Captain John Quilliam on his 250th anniversary.”

Frank Cowin, co-author of ‘Favourite of Fortune, Captain John Quilliam, Hero of Trafalgar’, said: “Captain John Quilliam is a much celebrated Manx hero but is not well known elsewhere.  This despite him being the third most senior person on HMS Victory at the Battle of Trafalgar where it is claimed he steered her into the battle. Commemorating his life with a book and a stamp collection is a fitting tribute.”

Dr Phil Smith, Chairman of the Isle of Man Quilliam Group said: "After a disappointing 2020 during which the Quilliam Group had hoped to celebrate the 10th anniversary of founding, 2021 has proved to be a bumper year of milestones. One of our longest wished for projects, the Publication of "Favourite of Fortune", John Quilliam's definitive biography, has come about thanks to a team of authorities; our own Frank Cowin, Andrew Bond, and Professor Andrew Lambert. The last is a famous author and academic specialist on naval history, and one of our group's regular lecturers, which brought the topic of "Our Man" to his attention. His expertise in the field also enabled us to bring the project to fruition by providing funding for its publication. The fact that this should coincide with the production of the beautifully designed Quilliam stamp issue, from our group member Colleen Corlett, makes this a double celebration bringing together two projects that have been our aspiration list for a long time. The fact that they both also carry references to the stained-glass window in Arbory Church, another Quilliam Group project designed and built by Colleen, is an added bonus for us.”

Andrew Lambert FKC Laughton Professor of Naval History, Kings College London said: “In the age of Nelson the Royal Navy had many heroes, but only a select few were hand picked by the great man: among them was John Quilliam, Manxman, world traveller, and a veteran of many battles, a man of skill and dedication, who exemplified the finest traditions of the service.”

Maxine Cannon, General Manager Isle of Man Stamps & Coins, said: “We commemorate a true Manx hero by celebrating what would have been the 250th birthday of Captain John Quilliam. Being able to present our local heroes, who have played a vital part in history, to a worldwide audience is very important to us and we are extremely proud of our ancestors and heritage.”