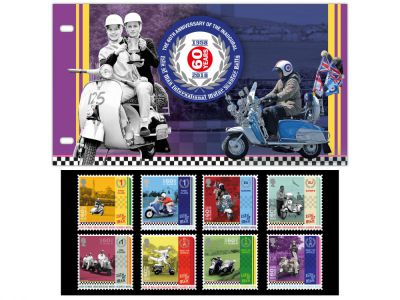 The eight-stamp issue, Isle of Man International Scooter Rally, is a fun and vibrant collection which features standout moments from the history of the gathering.

They include the iconic Vespa display team pictured at Noble's Park in Douglas in 1958; Neville Frost, who smashed the six minute barrier for the Druidale circuit; and the 1957 Ramsey Sprint when the rally – supported by TT legend Geoff Duke – returned after a year off due to the seamen's strike.

The bi-annual event has huge sporting and cultural significance on the Island, with a history which dates back to the 1950s, and was once described by the chairman of the Isle of Man Tourist Board as 'the most important cog in the mosaic of Manx tourism'.

For any scooter enthusiast, the stamp collection is the perfect gift for an event.

Steve Jackson, author of Scooter Mania! (recollections of the Isle of Man International Scooter Rally), has written the issue text which accompanies the collection.

He said, "The Isle of Man Scooter Rally has a long, proud history which dates back to the 1950s, so it was a real honour to be asked by the Isle of Man Post Office to work on a stamp issue to commemorate this spectacular event."

"As someone with an avid interest in the sport, it has been fascinating to research and re-create some of the stories from what is a remarkable and multi-faceted festival."

They include a government delegation which travelled to Germany and Austria in the 1950s to see how the event could be expanded, the launch of Concours D'Elegance competitions and glamour events such as the crowning of the Rally's Scooter Girl, the instigation of a night trial, sand racing on Douglas beach and, in the early 1980s, a ban on scooters visiting the Island after trouble in the UK.

The Manx government is also planning to mark the 60th anniversary of the first Manx International Scooter Rally with a ballroom event at the Villa Marina later this year.

Julie Edge MHK, Chairman of Isle of Man Post Office said," International scootering and its links with the Isle of Man go back more than half a century and has played a key role in Manx tourism."

"This set is a tribute, not only to the achievements of each of these popular racers, teams and iconic machines, but to the fascinating history of the event."

The issue date for the Isle of Man International Scooter Rally Set and Sheet Set is May 10, 2018. The collection includes mint and CTO set of stamps, Set Mint and Set CTO, which are all available for online.