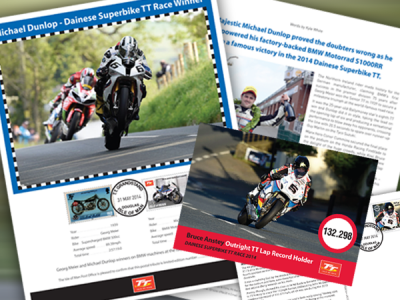 History was made in the opening race of the 2014 Isle of Man TT, and now fans can own limited edition celebrations of the new chapters of the TT story written by Michael Dunlop and Bruce Anstey.

Both are available with a special TT Grandstand cancellation featuring Saturday's date, and can be purchased now from the Post Shops behind the TT Grandstand and in Regent Street, Douglas. The Michael Dunlop print is priced just £10 until Saturday June 7th (normal price £12.50), while the Bruce Anstey postcard is £1.75.

The A4-sized print features an action-packed photograph of Michael Dunlop leading the way in the Superbike race on his factory-backed BMW Motorrad S1000RR. The Ballymoney-man proved the doubters wrong when he stormed to a 20 second victory ahead of Guy Martin, taking his eighth TT win. It was a dominant win for the 25-year-old, who smashed the lap record on both the first and second laps.

It was an historic moment for BMW, the first 'big bike' win for the German company since 1939, when George Meier won the Senior TT on a supercharged 500cc machine. The print includes postage paid images featuring the motorcycles of both Meier and Dunlop, as well as the story of the 2014 Superbike TT as told by respected motorcycle journalist Kyle White.

This very special print is a limited edition of just 1,000 examples.

On the final lap of Saturday's race, New Zealand's Bruce Anstey stunned everyone with his jaw-dropping speed. He delivered on the promise he had shown during Practice Week by completing the 37.73-mile lap at an average speed of 132.298mph, the fastest speed ever and first time anyone has lapped at more than 132.

This moment of TT history is celebrated with a prepaid postcard, limited to just 2,500 examples, featuring a photo of Bruce on board his Valvoline-backed Padgett Honda CBR1000RR Fireblade during the 2014 TT Superbike race. The wonderful image comes courtesy of respected road racing photographer Gavan Caldwell.

The postcard features the new lap record, the story of the lap, a postage paid image of the flying Kiwi and is available with a cancelled with a special TT Grandstand postmark bearing Saturday's date.

Maxine Cannon, General Manager, Isle of Man Stamps & Coins, said: 'The opening race of the 2014 Isle of Man TT saw history made, with the first victory for BMW in the premier class for 75 years and a new outright lap record.

'We felt it was important to celebrate the achievements of Michael and Bruce, and I feel the print and postcard are fitting ways to commemorate these stunning feats. They are limited editions and are sure to become highly collectable items of TT memorabilia straight away.'

The Michael Dunlop print and Bruce Anstey postcard are both available now from the Post Shops behind the TT Grandstand and in Regent Street, Douglas, and online from www.iomstamps.com. The Bruce Anstey postcard is £1.75, while the Michael Dunlop print is priced just £10 until Saturday June 7th (normal price £12.50) when purchased at the Grandstand or Regent Street Post Shops.

The Isle of Man Post Office stocks a wide range of TT and road racing products, including the all-new John McGuinness – The First 20 TT Wins collection, which is available to buy now. Visit the Post Shops or www.iomstamps.com for details.