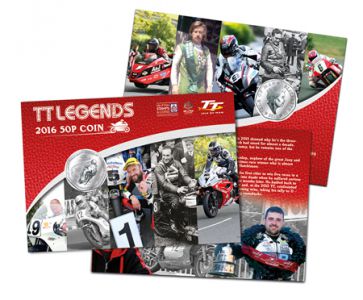 With the 2016 Isle of Man TT about to get under way, Isle of Man Post Office has unveiled a specially-minted 50p commemorating some of the biggest names to have contested the world-famous motorcycle road racing event.

The legal tender coin features seven of the biggest stars in the event's history, celebrating their outstanding achievements around the Isle of Man's iconic Mountain Course.

The 50p covers almost 100 years of racing, from Stanley Woods in the 1920s and '30s to heroes who will compete this year; Michael Dunlop, Ian Hutchinson, Bruce Anstey and sidecar king Dave Molyneux. Also featured is much-missed racer Steve Hislop, whose 1992 Senior TT battle with Carl Fogarty was voted the best race ever by fans, and Mick Grant, a seven-times TT winner lap record-breaker.

The coin is available in a wallet, priced £3.25, and in a special collector's gift pack featuring stunning photos of each of the legends over the years, priced £5.50.

Maxine Cannon, General Manager, Isle of Man Stamps & Coins, said: 'When we launched the first TT Legends 50p coin last year it proved a huge hit with fans, and we had many requests to bring out a new version for 2016. I'm really pleased we have this opportunity to celebrate the astonishing talents and racing feats of more TT heroes, paying tribute to their amazing skill and talent.

'The stunning 50p is a celebration of those men whose courage and determination has made them legends, and favourites to thousands of fans worldwide, while the special gift pack is an essential collectable for all TT fans.

'We hope fans agree we have produced another fitting tribute to the legends and heroes of this incredible road racing event.'

The 2016 TT Legends 50p can be ordered now from www.iomstamps.com, the TT Postshops at the Grandstand and in Regent Street, Douglas, or at any Post Office. You can also call 01624 698430 or email stamps@iompost.com.