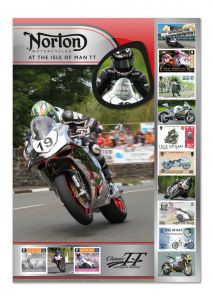 The iconic British manufacturer has been part of the TT legend from the very beginning, taking victory in the Twin Cylinder race at the first meeting in 1907. Today it remains one of the most successful marques in TT history, with 94 wins in the Isle of Man to date.

The release of the sheet coincides with the 2015 Classic TT, which includes a celebration of Norton's rotary years with a parade lap featuring racers past and present on classic machinery.
The stamp sheet, created in conjunction with Norton, is an essential collector's item for all motorcycle fans, especially Norton and TT enthusiasts. It features stunning photos and historic stamps highlighting great moments in the story of Norton at the TT.

Steve Hislop's unforgettable victory on the Abus Norton in the 1992 Senior TT, when he beat Carl Fogarty in a showdown voted the greatest TT race ever by fans, is featured. Also recalled is the 1935 Senior battle between Stanley Woods and Norton-mounted Jimmy Guthrie, Freddie Frith's 1937 Senior TT win and Mike Hailwood's victory in the 1961 Senior TT, when eight of the top 10 places were taken by Nortons.

The stamps also recall Norton TT winners Artie Bell and Peter Williams, who rode the 748cc Norton to victory in 1973, as well as the stunning and innovative 350cc 'Kneeler', which was campaigned in 1953.

The modern resurgence of Norton, under the leadership of Stuart Garner, is also celebrated on the new sheet. Pictures from the manufacturer's archives show every machine campaigned since Norton returned to the TT in 2012 with the SG1, including the SG4 Cameron Donald took to 18th place in the 2015 Superbike TT.

The commemorative stamp sheet is available to order now priced £6.00. It can be purchased from www.iomstamps.com, Post Offices in the Isle of Man, by calling 01624 698430 or by emailing stamps@iompost.com. It will also be available from the Post Shop at Sunday's Festival of Jurby, hosted by the VMCC at Jurby airfield.

Graham Cregeen, Chairman, Isle of Man Post Office, said: 'Norton is at the heart of the Isle of Man TT legend, and we are delighted to be working with the manufacturer to celebrate an association which has lasted more than 100 years.
'Many of the greatest TT stories involve Norton motorcycles, not least the 1992 Senior which fans voted the best race ever. We hope collectors and enthusiasts will agree this specially-commissioned sheet captures not only the history of Norton at the TT, but also celebrates the marques return to the Mountain course and looks forward to future success.'

Norton CEO Stuart Garner added: 'I am delighted that Norton and the Isle Of Man Post Office have been able to create this special edition stamp sheet celebrating the history of Norton at the Isle of Man TT races.

'We wanted to create something that captured the special relationship between Norton and the TT. The passion and excitement of road racing is captured in both Norton and the TT races, the stamp sheet images reflect this spirit perfectly. We're sure racing fans and stamp collectors alike will agree and share our excitement at the new collection.'