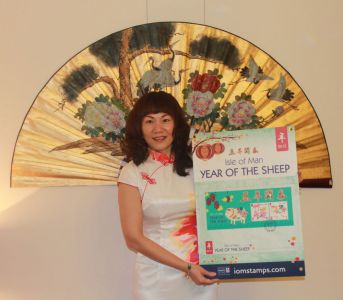 The Post Office is very proud to have teamed together with the Isle of Man Chinese Association to present the first miniature sheet of 2015, a celebration of the Chinese Year of the Sheep. This stunning sheet launches January 2, 2015 and recognises the Isle of Man's special commercial and diplomatic relationship with China, which will be further strengthened later in 2015 by the Post Office's attendance at China International Collection Expo in Beijing (CICE).

This is not the first time the Post Office has had a presence in China, in 2013 a team of representatives joined 60,000 other people at the Beijing Exhibition Hall for the opportunity to showcase Isle of Man Stamps and Coins at the 2013 show. The Chinese philately market has become a rapidly growing arena and offers many opportunities to stamp producers and trade experts alike.

The year 2015 is going to be an exciting time. The sheep is the eighth sign in the Chinese astrological calendar, and "eight" is traditionally believed to be a lucky number. The number is also considered to attribute peace and prosperity. Those under the sheep in the Chinese zodiac could be born in 1955, 1979, 1991, 2003, 2015 and 2027. It is believed that people, who fall under this sign experience happiness in other people's happiness, are pure in nature, fashionable, well-mannered and sophisticated. The Year of the Sheep dates are between February 19, 2015 and February 7, 2016 according to the Chinese Lunar calendar.

This unique collectible miniature sheet has been designed by artists Ms Du Xiaoxiao and Mr Guo Zhenshan. The design strikes a balance between traditional and modern art and includes bold, vibrant coloured images of sheep with floral patterns, in addition to Chinese lanterns and calligraphy. The sheet also incorporates the lucky colours of this horoscope red, green and purple.

Jenny (AiZhen) Zhou, Chairman and Founder of the Isle of Man Chinese Association has played a pivotal role in the creation of this issue having produced the accompanying text for the miniature sheet's presentation pack. The objective of the Chinese Association is to promote communication and the integration of Chinese culture within the Isle of Man through individuals, businesses, organisations and schools. Both Jenny and her Isle of Man group are proud to support the Post Office and the local community.

Jenny (AiZhen) Zhou, Chairman of the Isle of Man Chinese Association said: "I was thrilled when the Post Office contacted me and asked if I could provide assistance in preparing the issue text for their Year of the Sheep miniature sheet. Chinese New Year is an important traditional holiday to Chinese people and the stunning miniature sheet produced by Isle of Man Post Office captures this celebration beautifully. I hope the Isle of Man Post Office will continue producing these outstanding Chinese based stamps".

Maxine Cannon, Isle of Man Stamps and Coins General Manager said: "We are delighted to team up with the Isle of Man Chinese Association and celebrate the Year of the Sheep with our unique miniature sheet. It is testament to the strength of relations between Isle of Man and China and a fitting release to mark next year's trip to Beijing for the China International Collection Expo. I would like to thank Jenny for all her help and wish everyone a Happy Lunar New Year."

Aside from the Year of the Sheep miniature sheet, first day cover and presentation pack, a very special souvenir sheetlet featuring five designs with 16 stamps each to the value of 10p, in one highly-sought after collectable is now also available. The miniature sheet and sheetlet are available in mint condition or Cancelled to Order.