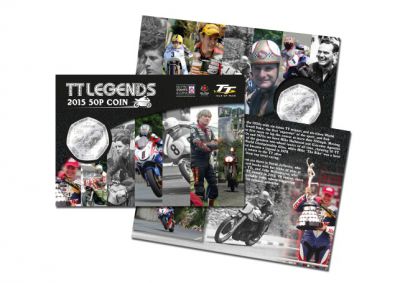 As the 2015 Isle of Man TT gets under way, Isle of Man Post Office has unveiled a specially-minted 50p commemorating the Legends of the world-famous motorcycle road racing event.

The legal tender coin features the names of seven of the biggest stars in the event's history, celebrating their outstanding achievements around the Isle of Man's iconic Mountain Course.

Isle of Man Post Office has also produced a limited edition collectable featuring the coin and a selection of TT stamps, and there will be just 100 editions signed by four of the riders featured.

The sport's first 'superstar' Geoff Duke, Bob McIntyre, the first to lap the course at more than 100mph, and great rivals Giacomo Agostini and Mike Hailwood are among the names featured. From the modern era are David Jefferies, current 'King of the Mountain' John McGuinness and, of course, 26-times TT winner Joey Dunlop.

The coin is available in a wallet, priced £2.95, and in a special collector's gift pack featuring stunning photos of each of the legends at the TT over the years, priced £5.00.

Just 300 will be produced. Of these, 200 are available for £27.50 each, while for the true collector, 100 will be available mounted and accompanied by the autographs of four of the riders featured – McGuinness, Molyneux, Hutchinson and Anstey – priced at £175.00.

Maxine Cannon, General Manager, Isle of Man Stamps & Coins, said: 'The Isle of Man TT has a history stretching back more than 100 years, and it has produced amazing stories and astonishing racing feats. At the heart of the event are the racers, those who test themselves against the Mountain Course, which is acknowledged to be the ultimate challenge in motorcycle racing.

'As the 2015 TT gets under way, we believe it is fitting to pay tribute to those men whose courage, determination and skill has made them legends, and favourites to thousands of fans all over the world. The stunning 50p is a fitting celebration, and the special gift pack is an essential collectable for all TT fans.

'Our limited edition TT Heroes set includes racers from recent years who are on their way to becoming TT legends. Michael Dunlop has continued the winning tradition of his father Robert and uncle Joey, Ian Hutchinson rewrote the history books in 2010 with five TT wins in a week, sidecar star Dave Molyneux is one of the most successful TT racers in any category, Bruce Anstey is currently the TT's fastest man, with a record lap of 132.298mph last year, and Guy Martin is one of the event's most recognisable names.

'We hope fans agree we have produced fitting tributes to the legends and heroes of this incredible road racing event.'

David Cretney MLC, Member of the Department of Economic Development, responsible for Tourism and Motorsports, said: 'I am delighted with the issue of this new specially-minted Isle of Man 50p coin which celebrates the remarkable careers of seven true TT Legends, starting in the 1950s with six times TT winner Geoff Duke and from the modern era the likes of Joey Dunlop who gained a total 26 victories and John McGuiness who secured his 21st TT victory in 2014.'

The TT Legends 50p and TT Heroes limited edition set can both be ordered now here, the TT Postshops at the Grandstand and in Regent Street, Douglas, or at any Post Office. You can also call 01624 698430 or email stamps@iompost.com.