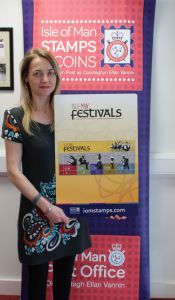 Isle of Man Post Office is proud to present a vibrant and artistic 'Isle of Man Festivals' miniature sheet featuring five popular Manx festivals that celebrate the Island's cultural heritage. The stamps which have been designed locally by Isle of Man Advertising were issued today (6th April 2017).

Each stamp on the miniature sheet has a value of 75p, a festival image and micro text featuring words relevant to the specific event.

The initial stamp image features the 'Mananan International Festival' using an image of conductor's hands. The festival, which was established in 1975, is held annually at the Erin Arts Centre, and had the late Sir John Betjeman as its first patron. This prestigious event has long attracted leading stars from the world of classical music, jazz, theatre and films to the Isle of Man.

The next stamp in the collection pays tribute to 'Manx LitFest', first held in 2012. The image depicts a reading at the festival which celebrates the written word by bringing together authors, poets and readers from around Britain for six days of literature-focused events.

The third stamp showcases 'The Manx Competitive Music, Speech and Dance Festival', also known as 'The Guild', which marks its 125th anniversary in 2017. The stamp shows an image of a female performing at the festival, which was first held in December 1892 as a one-day event but has now evolved to a week of performance and competition.

The penultimate stamp depicts a traditional dancer at the Ramsey-based 'Shennaghys Jiu', which brings together many young performers from across the Celtic nations. In 2018 the festival will have its 20th anniversary and continues to demonstrate a wide range of talent in music, dance and other disciplines.

The final stamp shows an accordion player at 'Celtfest', the new name for 'Yn Chruinnaght' (The Gathering) unveiled in March. Celtfest features arts, crafts, dance, language and music, and is a celebration of Manx culture and the relationship between the Isle of Man and the other Celtic countries. It traces its origins back to the 1920s, and the work of William Cubbon, becoming established as Yn Chruinnaght in the late 1970s thanks to the efforts of Mona Douglas and others.

Commenting on the stamps, a spokesperson for Culture Vannin said: "We're delighted to see five fantastic festivals in the Isle of Man featured in this issue. Culture and arts are at the heart of our communities, they are key to celebrating a sense of place, and of sharing that with everyone who wants to enjoy it. Not only do we have very fine Celtic traditions here, we have a love of the arts that runs deep within us, that knows that Islands such as our own are meeting places for culture and creativity, for crystallising new ideas and taking them forward."

Isle of Man Stamps and Coins General Manager Maxine Cannon added: "With this year's traditional festivals on the Isle of Man due to begin, we at the Isle of Man Post Office are proud to celebrate the artistic and cultural heritage of the Island with the release of this miniature sheet. The festivals, ranging from those that have been running for more than 100 years to those more recently established, are a tribute to all those who have been involved with Manx arts and culture over the years."

"We'd like to thank Culture Vannin for its support and assistance in helping to bring this stunning sheet together."

The Isle of Man Festivals stamp issue can now be viewed and ordered at www.iompost.com/festivals.