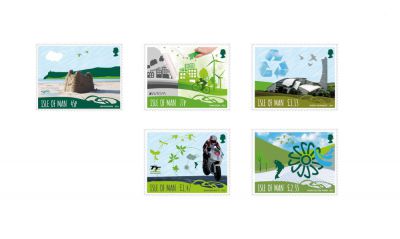 Isle of Man Post Office is pleased to present a set of five stamps in celebration of it being part of the Europa stamp project for 2016, "Ecology in Europe - Think Green" and the Island recently being awarded United Nations Educational, Scientific and Cultural Organisation (UNESCO) status as a world biosphere region. The stamps which have been designed locally by Isle of Man Advertising are due for issue 7th October 2016.

Biosphere regions are sites across the globe endorsed by UNESCO as being outstanding places for nature and for people, where there is a healthy balance between the two. There are currently 669 biosphere regions in 120 countries worldwide. UNESCO biosphere status for the Isle of Man recognises the Island as being a special place to live, work and visit, and the first entire country to gain this prestigious accolade. To earn this accolade, the Island has committed to taking care of its nature and wildlife, as well as culture, heritage and communities. Maintaining and improving the Island's infrastructure and economy in ways that respect and support its environment as well as helping more people to understand what makes the Island so special and encouraging active involvement in keeping it that way.

The 45p stamp shows an image of one of the Island's beaches and celebrates its unique environment and culture which has been recognised with the UNESCO biosphere status.

The 77p stamp shares the winning image created by Cyprus Post artist, Ms Doxia Sergidou and was chosen from 24 entries by Europa stamps to mark the 60th anniversary of the Europa stamp movement. The stamp shows a hand actively replacing the grey colour, representing environmental pollution with the green to symbolise environmental living and hope and that "it is in our hand to create a greener planet".

Featured on the £1.13 stamp is an image of the Island's energy from waste plant which is used to convert 60,000 tonnes of commercial and domestic waste every year, producing ten per cent of the Island's electricity using its state of the art technology and onsite laboratory.

The Island is also gaining a reputation for developing green technology, most notably through the advancement of electric bike racing, an image of which is depicted in the £1.47 stamp. In 2009 the electric bike made history with the first race around the Mountain Course for electric powered bikes, eight years on the TT Zero is going strong with the outright lap record – an average speed of 119.27mph around the 37 ¾ mile circuit.

Finally, the £2.33p stamp is inspired by the Island's renewable energy production. At the heart of Tholt-y-Will stands a building containing two 600 watt kilowatt turbines powered by water from the nearby Black Eary and Sulby Reservoirs, together they produce four gigawatt hours of hydro-electric power every year, meeting one per cent of the Island's annual demand.

In recognition of this prestigious accolade from a respected global organisation, we were delighted that the Isle of Man Post Office designed a range of commemorative stamps for the occasion of Dr Han Qunli travelling to the Isle of Man.

It will also be our great pleasure to provide Dr Han Qunli, Secretary of UNESCOs Man and the Biosphere (MAB) Programme, with a set of these stamps when he visits the Island to formally present us with Membership of the World Network of Biosphere Reserves (WNBR) on 1st of November 2016."

Maxine Cannon, Isle of Man Stamps & Coins General Manager said: "Isle of Man Post Office is pleased to present a set of stamps in celebration of our Island being awarded UNESCO biosphere status and the world's first entire country to gain this prestigious accolade."

She continues: "Peter Longworth has provided great assistance to us with this stamp issue and we would like to thank him for all his support."

The stamp collection is available to pre-order from today and can be purchased at www.iompost.com/biosphere